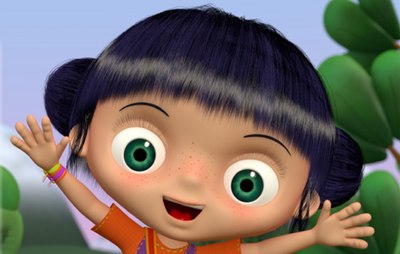 “We are very pleased to further expand our successful cooperation with m4e AG internationally and long-term,” said Simba Dickie Group COO Uwe Weiler. “Werner Lenzner, responsible for license properties within the company group, qualifies Wissper as a highly attractive new property that combines adventure, humor and emotion and with its charming characters is ideally suited to develop toys.”

“We are proud that the fantastic relationship and experience we made in the past, results in a broader collaboration with our longtime partner Simba Dickie Group,” said m4e CEO Hans-Ulrich Stoef. “With all the toy possibilities that Wissper offers, we couldn’t team up with a better partner for developing the toy line for this girl’s brand.”

“The expertise and creativity of Simba Dickie Group will contribute to making Wissper an international success story,” added Bernd Conrad, head of licensing at m4e. “Now we can start developing a state-of-the-art toy range hand in hand with the production of the TV series -- the creative people at Simba Dickie Group together with the animation team -- this is real teamwork!”

With the agreement with Simba Dickie Group, the second most important pillar for the long-term brand development of m4e’s new preschool property is in place. Last fall the company had announced to have closed an extensive treaty with BASTEI Media, a subsidiary of Bastei Lübbe AG, making the publishing house a co-producer of the series. BASTEI media will join the property globally in terms of book formats as well as apps.

m4e’s new preschool series (52 x 7 minutes) is aimed at young girls in the target group of 4 to 7-year-olds, and is currently developed and co-produced jointly with Dan Good and the London-based animation studio Absolutely Cuckoo (Waybuloo). Completion is scheduled for end of 2015.

The series concerns a perfectly normal little girl called Wissper, although she has a very special talent: She is able to communicate with animals. She is thus in a position to understand their problems and then to assist them. Through secret portals in her parents’ house she can travel to different worlds.