Luxion and Pixologic Partner to Release KeyShot for ZBrush 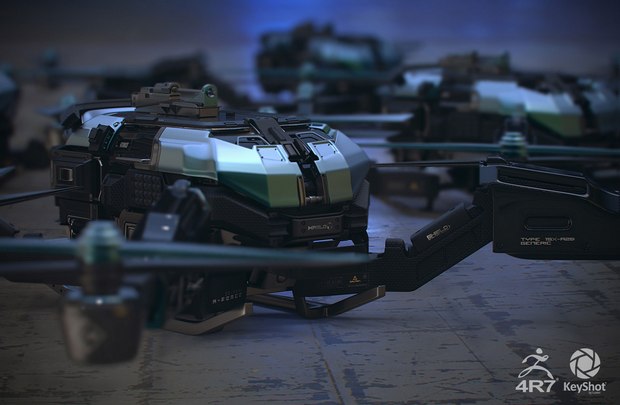 ‘KeyShot for ZBrush’ speeds workflow with immediate visualization of materials and lighting. Image: modeled in ZBrush, rendered in KeyShot by Cki Vang.

Luxion, a leading developer of advanced rendering and lighting technology and maker of KeyShot, the first real time ray tracing and global illumination program, in partnership with Pixologic, makers of the award-winning ZBrush software, is pleased to announce the partnership that now makes KeyShot an integral part of the ZBrush workflow, with ‘KeyShot for ZBrush’ and the ZBrush to KeyShot Bridge, available now with the release of ZBrush 4R7.

Pixologic’s ZBrush is known throughout the 3D industry as the key software for generating digital sculptures fast. With an integrated workflow between ZBrush and KeyShot introduced in the past, 3D artists realized the two as an indispensable combo for creating concepts quickly. Pixologic takes this integration even further with ‘KeyShot for ZBrush’, a standalone rendering solution with direct integration inside ZBrush through the ZBrush to KeyShot Bridge that allows users to visualize their concepts, creating light studies in KeyShot as they continue to sculpt, texture and paint their model in ZBrush.

“The speed and realism KeyShot offers, compliments the ZBrush artist’s workflow perfectly,” says Jaime Labelle, COO at Pixologic. “The feedback from artists has been instrumental in the development effort, for a process that is faster than ever before. It’s this partnership with Luxion and the new modeling capability in ZBrush 4R7 which allow artists to explore beyond the limits of imagination.”

“We are amazed at the capabilities ZBrush brings to the 3D Artist,” says Henrik Wann Jensen, Co-founder and Chief Scientist of Luxion. “In an industry where concepts are needed quickly and the artist’s workflow needs to be faster, ‘KeyShot for ZBrush’ provides the modeling and rendering speed that those in media and entertainment require.”

"The first time I saw KeyShot, I immediately realized how I could show my art, my models, my products more effectively than other render engines," says Cki Vang, CG Artist. "For me the KeyShot Bridge is the cool feature of the year. Each SubTool can have a different material shader--light, glass, metal, etc.--It's very useful for the designers, offering us the possibility to obtain final presentations faster."

‘KeyShot for ZBrush’ is activated from inside ZBrush when an artist is ready to set lighting and materials for their creation with all SubTools sent directly to KeyShot. As a separate program, ZBrush users can apply materials and lighting while continuing to work within ZBrush to refine their idea, then send updates over to KeyShot to see their updates immediately. The integration allows for any number of SubTools and complete support of MatCaps while retaining all texturing and PolyPainting.