Lucca Comics & Games Calls for Entries for the OverLuk Award 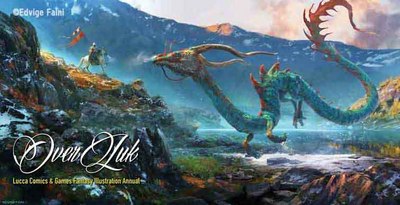 Lucca Comics & Games announced a call for entries for its OverLuk Award, which showcases and celebrates the work of professional artists in fantasy, science fiction, horror illustration, game, videogame and movie concept art.

Lucca Comics & Games festival is one of the leading European conventions for comics, videogames and fantasy art lovers, showcasing concept artists and fantasy illustrators working across different media, including video and tabletop games, books and comics, cinema and fine arts.

The grand prize award is an invitation as main guest, including travel, accommodation for two people and a booth at the main festival, which will be held Nov. 1-5 in Lucca, Tuscany.

Winners for each category (cover, interior illustration, concept art, editorial, unpublished/commission) will have the chance to attend Lucca Comics & Games 2017 and to run their own booth in the Luk for Fantasy area.

The winners will be announced on May 30 on the website.