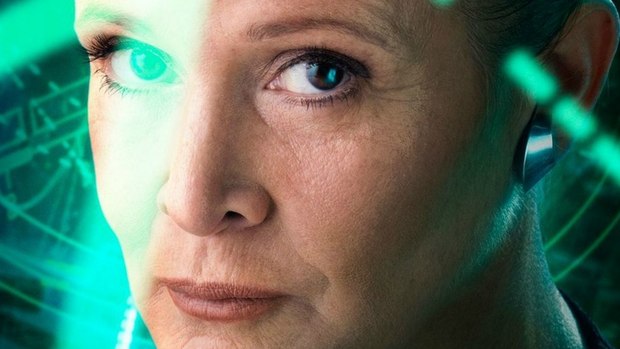 Rogue One: A Star Wars Story featured a younger version of Princess Leia, as well as the insidious Grand Moff Tarkin, both of whom were all-CG characters created for the movie.

Rogue One takes place before the events of the original trilogy, so it made sense to the filmmakers that they would need a younger Princess Leia for the character to be convincing. But with the recent passing of Carrie Fisher (who played Leia), many fans feared the emergence of a present-day CGI Fisher in future installments of The Force Awakens saga, which takes place after the original trilogy’s timeline. (Tarkin was originally played by the late Peter Cushing, who died in 1994.)

Now Lucasfilm is setting things straight, letting fans know that a CG Fisher will not be used in the upcoming movies.

In a statement published on the official Star Wars website, the production company noted that they “don’t normally respond to fan or press speculation,” but wanted to comment on this rumor:

We don’t normally respond to fan or press speculation, but there is a rumor circulating that we would like to address. We want to assure our fans that Lucasfilm has no plans to digitally recreate Carrie Fisher’s performance as Princess or General Leia Organa.

Carrie Fisher was, is, and always will be a part of the Lucasfilm family. She was our princess, our general, and more importantly, our friend. We are still hurting from her loss. We cherish her memory and legacy as Princess Leia, and will always strive to honor everything she gave to Star Wars.

As was previously reported by Variety, prior to her death Fisher had finished filming the upcoming Star Wars: Episode VIII, which is slated for release in December, 2017. So fans will see Princess Leia in another Star Wars film, though it remains to be seen what will become of her character in Episode IX, which will likely begin shooting in early 2018.

According to a report by The Hollywood Reporter, directors and producers involved with the Star Wars franchise have been meeting to discuss the future of Princess Leia, with the possibility that her character will be written off.

In the same report, Oscar-winning VFX supervisor Michael Fink told THR that “there are filmmakers who will be willing to take up the challenge,” of using CG to replicate Fisher, although he did add that it’s probably a bad idea. “Should we create additional roles for Princess Leia? I don’t think so,” Fink said. And apparently Lucasfilm agrees.

Rogue One: A Star Wars Story is currently one of 10 films under consideration for nominations for the Oscar for best visual effects. You can read all about this year’s VFX Bake-Off here.