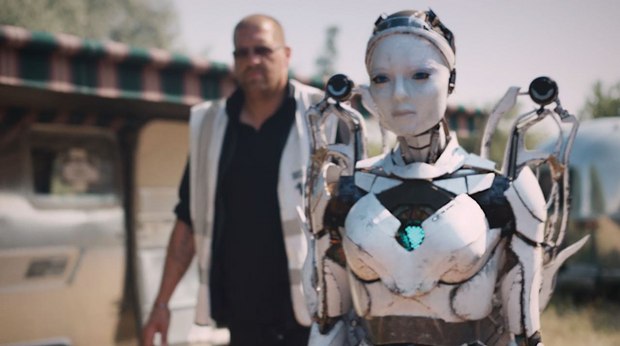 Set amidst the euphoric madness of a summer music festival, Robot & Scarecrow is a uniquely modern fairy tale about love. When a robot pop diva flees her keepers she runs straight into the arms of a lonely scarecrow desperate for adventure. They spend an incredible night together, caught in a heady vortex of music and magic:

“Kibwe’s got a totally unique approach,” Emmerson commented in an interview about the project with It’s Nice That, “and had an ambitious vision from the outset that involved animating pretty much every frame of the film. We got loads from the location and after that, it was a three-year process with a small team of super skilled animators and visual effects artists, who translated the live action performances.”

“Conceptually our VFX approach is super simple, we shoot the actors in situ, and then replace their faces digitally sometimes with the robot the whole body,” Tavares explained in an interview with StashTV. “An animator matches the actor’s performance. We then clean up the edges around them painting out anything that’s not meant to be there. However explaining it is easier than the execution, which is very labor intensive and requires a lot of precision and iterations, and a lot of person-hours.”