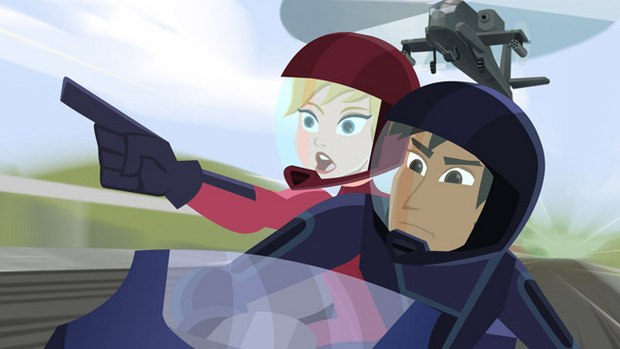 Los Angeles, CA -- National television distributor American Public Television (APT) and presenting station KRCB announced the pilot episode of the new animated series Lost Treasure Hunt will be available to Public TV stations beginning in October 2014. This new history series, developed by the award-winning animators behind Shrek, The Iron Giant, and Frozen, will change the way television mixes entertainment and education, and reach out to a multigenerational audience.

Based on an original story by Matt Davis (DreamWorks and Sony), Lost Treasure Hunt is a fast moving adventure that combines high caliber history with engaging characters and plot twists that will challenge anyone who thinks history is not relevant or exciting. Director Richard Bazley brought his experience as a veteran Disney animator to Lost Treasure Hunt with a traditional animation style that sets a new standard for digital 2D animation.

The National Endowment for the Humanities (NEH) provided funding for this series as an opportunity to promote history for children with a show that would interest “tweens” and attract multigenerational family viewers. After a successful crowdfunding campaign on Kickstarter in May, Lost Treasure Hunt raised $12,332 (above its original goal of $10,000) to donate DVDs to schools in need and broadcast the pilot nationally through APT.

“Rather than limit the amount of educational content, Lost Treasure Hunt makes history central to the plot and characters,” Matt Davis explains. “By keeping the story moving quickly and not watering down history, we can delve into detailed, and sometimes challenging, history topics in a way that is relevant to viewers.”

The screenplay is by David Rosenberg who has scripted some of Nickelodeon’s most acclaimed television series including Rocket Power, Rugrats, and The Wild Thornberrys. Chance Thomas created the original music score.

The 30-minute pilot episode kicks off as Lost Treasure Hunt characters, Ava and Dex, race to find actual historic artifacts on the trail of Christopher Columbus in Italy, Spain, the Caribbean, and elsewhere. They dodge spies and counterspies while uncovering clues, and learning about multiple sides of the Columbus story. Public TV stations nationwide will air the special over Columbus Day weekend, as well as rebroadcasts in December, and into 2015. The Columbus voyage of 1492 was chosen as the subject of the pilot to demonstrate how Lost Treasure Hunt presents history with objectivity, showing multiple sides of the Columbus story in a way that invites viewers to investigate for themselves.

The animated sequences are filled with authentic details. Historical items are based on rare, real life documents from collections in Europe and the Americas. Using layered storytelling that reaches out to multiple age groups, Lost Treasure Hunt is a unique collaboration between historians and animators interested in bringing history to a new generation.

“We wanted to break new ground not only with the story, but also with the animation,” said director Richard Bazley (Disney and Warner Bros.) “Working with the talented animators at Ghostbot Studios, we were continually pushing the boundaries of animated adventure for television.” Discussing the mixture of traditional and digital 2D animation, Bazley adds, “We have strived to move beyond the normal limitations of a television show and not let the tools restrict us, but to push the technology and artistry and to look for ways to bring classic animation sensibilities to digital 2D and give it a more expressive and cinematic look.”

Future episodes include sending the Lost Treasure Hunt characters to find Harriet Tubman clues along the Underground Railroad or to Boston to understand the causes of the American Revolution in more detail. The pilot highlights the filmmakers’ goal to produce a series that does not promote a specific viewpoint, but instead launch a series that will ignite a young generation’s interest in history and our common heritage.