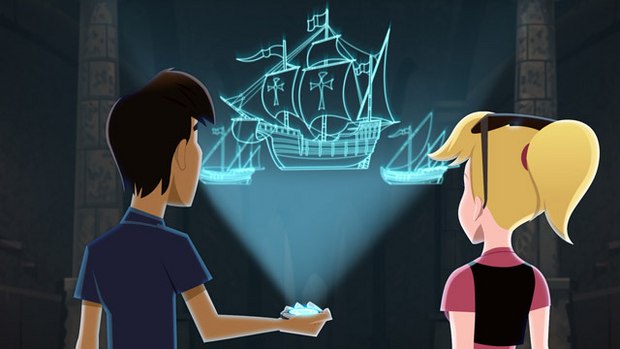 History education is getting a boost from some of the filmmakers who brought you animated films like Shrek, The Iron Giant, and Cloudy with a Chance of Meatballs.

APT (American Public Television) will distribute Lost Treasure Hunt as a tie-in to Columbus Day 2014. Nearing the end of production, Lost Treasure Hunt asks Kickstart contributors to help raise funds that will ensure that the Columbus special will be broadcast nationally and distributed to school for use in classrooms across the country.

“This series shows that one of the best ways to learn history is through an action adventure story,” says Disney animator and Lost Treasure Hunt director Richard Bazley. "When we set out to make a history program, we were told that educational shows are for young children only, and that we would need to water down history to make it work. We completely disagree.”

Nationally recognized educators and leading history scholars came together with animators and filmmakers to present history in a style that would be relevant to children, and would successfully compete for the attention of a young audience with competing media choices.

“Many of us came to Lost Treasure Hunt from feature animation," says feature producer Matt Davis, who is one of the writers on Lost Treasure Hunt, "because we wanted to bring a new kind of storytelling to educational television -- a compelling narrative that makes history essential to the story.”