Duo behind Oscar-winning ‘Spider-Man: Into the Spider-Verse,’ ‘Cloudy with a Chance of Meatballs,’ and ’21 Jump Street’ leave 20th Century Fox Television for new five-year deal. 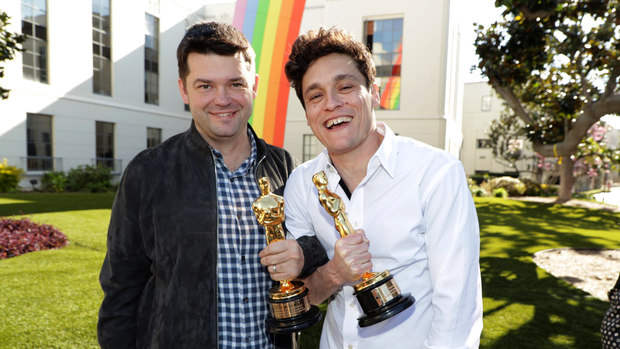 Phil Lord and Chris Miller, the creative juggernaut behind the Oscar-winning animated feature, Spider-Man: Into the Spider-Verse, have signed a massive 9-figure production deal with Sony Pictures Television, according to Variety. The pair’s Lord Miller production company will leave 21st Century Fox Television for a new deal at Sony to develop live-action and animated series as well as develop and oversee other writers’ projects. The deal reportedly includes their developing a set of TV series based on Sony’s Marvel characters.

Lord and Miller have had a long, successful relationship with Sony, including films such as Cloudy with a Chance of Meatballs, 21 Jump Street and 22 Jump Street as well as the aforementioned award-winning animated Spider-Man, in addition to their LEGO Movie franchise work for Warner Bros. They also have multiple feature projects in the works with Sony Pictures, including The Last Human, which they are developing to direct.

Fox ordered their most recent television project, the animated series Bless the Harts, straight-to-series, with a premiere set for this fall. Created by the Emmy Award-winning Emily Spivey, the show, which follows a group of Southerners who are always broke as a joke, and struggling for the American dream of status and wealth, will feature the voices of Kristen Wiig, Maya Rudolph, Jillian Bell and Ike Barinholt.

“This is a significant milestone for our television business, having the opportunity to work with two of the most creative forces in the industry in both our film and television businesses,” said Mike Hopkins, Chairman of Sony Pictures Television. “Building on our strong IP and creating new franchises has been a key focus for SPE, and the best way to do that is to invest in remarkable storytellers like Phil and Chris. We are thrilled to welcome them to the SPT family, and I want to thank Jeff, Chris and Jason for all their hard work in pulling this deal together.”

“Phil and Chris have reimagined every medium and genre they have touched,” said Sony Pictures Television President Jeff Frost.  “Whether it’s television, features or animation, they have created their own unique brand and style.  We are so excited to be working with these brilliant creators and showrunners and are looking forward to collaborating with them in every aspect of television - comedy, drama, animation and beyond.”

“We are so grateful to everyone at Sony Pictures Television for choosing to partner with us and expand our enduring relationship with the studio. Together we aim to make groundbreaking work of the highest quality and integrity, and to place that work in convenient proximity to your eyeballs and earholes, wherever you may be,” said Lord and Miller.