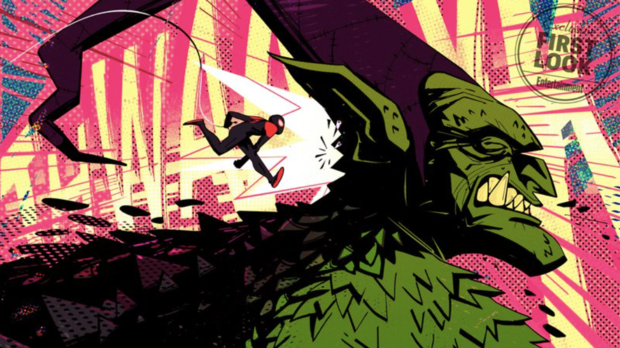 The newly-unveiled concept art arrives courtesy of Entertainment Weekly ahead of this week’s San Diego Comic-Con, where droves of Spider-Man fans are sure to appear.

Set in an alternate universe from Sony’s other Spider-Man properties, Spider-Man: Into the Spider-Verse follows Miles Morales, a Marvel Comics character created by writer Brian Michael Bendis and artist Sara Pichelli who first appeared in comic form in 2011. Morales (voiced by Shameik Moore) gains superpowers after being bitten by a radioactive spider, and must learn how to fit into a world already containing multiple Spider-People, including Gwen Stacy (Hailee Steinfeld) and a “jaded” Peter Parker (Jake Johnson).

According to Phil Lord and Chris Miller, who began developing the film in 2014, Spider-Man: Into the Spider-Verse will have its own unique style, combining the in-house CG animation of Sony Pictures Animation with traditional hand-drawn comic book techniques inspired by Pichelli’s work.

Audiences got their first look at the massive Green Goblin, which is reimagined in this offshoot universe as a house-sized creature with dragon-like wings, in last month’s official trailer:

Phil Lord and Christopher Miller, the creative minds behind “The Lego Movie” and “21 Jump Street,” bring their unique talents to a fresh vision of a different Spider-Man Universe, with a groundbreaking visual style that’s the first of its kind. “Spider-Man: Into the Spider-Verse” introduces Brooklyn teen Miles Morales, and the limitless possibilities of the Spider-Verse, where more than one can wear the mask.

The film is directed by Bob Persichetti, Peter Ramsey, and Rodney Rothman from a screenplay by Lord. In addition to Moore and Steinfeld, Mahershala Ali, Jake Johnson, Liev Schreiber, Brian Tyree Henry, Luna Lauren Velez, and Lily Tomlin round out the voice cast.

Spider-Man: Into the Spider-Verse swings into theaters later this year on December 14.