Director Sanjay Patel draws from his own experiences for the film’s story, which follows his journey from a California kid watching cartoons to a man respecting his father's Indian traditions. 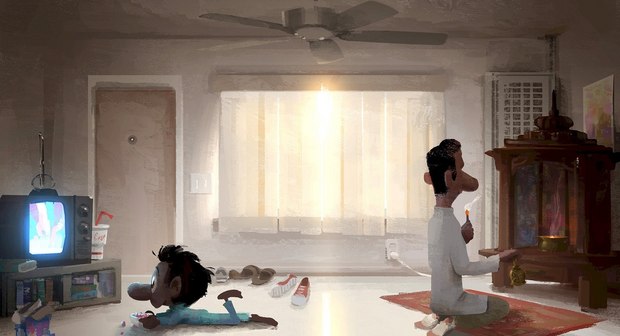 Patel reportedly drew from his own experiences for the film’s story, and while the short is dialogue-free, Patel enlisted Life of Pi composer Mychael Danna to create a fittingly non-Western soundtrack.

The story follows Patel’s journey from a California kid watching cartoons to a man respecting his father's Indian traditions. In a scene similar to Patel's own San Bernardino upbringing, the short opens with Sanjay glued to the TV when Dad interrupts for morning meditation. The meditating pair are then joined by three Hindu deities -- Durga, Vishnu and Hanuman -- who come to life inside Sanjay’s imagination to form a super hero team.

Check out the new images below: Sanjay’s Super Team will play in front of Pixar’s The Good Dinosaur, which opens in theaters on November 25th.

Patel and Grindle will both appear at Comic-Con this Thursday, July 9 from 11:00AM to 12:00PM in the Indigo Ballroom at the Hilton San Diego Bayfront for a panel called “The Super Story Behind the Pixar Short Sanjay’s Super Team.”