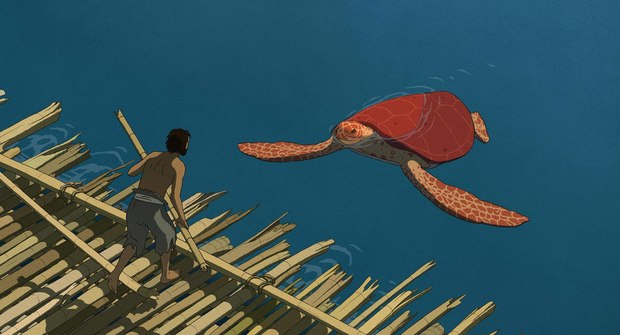 Two new images are available for Dutch animator Michaël Dudok de Wit's The Red Turtle, the forthcoming animated feature by the Oscar-winning director of Father and Daughter (2000) and The Monk and the Fish (1994).

Written in collaboration with Pascale Ferran, The Red Turtle is a co-production between Arte France Cinéma, Why Not Productions, Belvision, CN4 Productions and Paris-based film sales group Wild Bunch, in association with Japan’s famed Studio Ghibli. Studio Prima Linea is overseeing the animation.

Dudok de Wit wrote The Red Turtle with screenwriter/director Pascale Ferran (Lady Chatterly, Bird People). The story takes place after a shipwreck, and follows a man marooned on a desert island whose attempts to escape on a raft are thwarted by a giant turtle that sinks the makeshift craft. The new images arrive courtesy of Wild Bunch, which is handling international sales for the project, and is bringing a 50-second extract from the highly anticipated feature to this month’s 2015 Cannes Film Festival. Dudok de Wit is also set to give a special presentation about the film at the Annecy Festival in June.

According to a report by Screen Daily, Studio Ghibli co-founder Hayao Miyazaki was an admirer of Dudok de Wit’s work, and asked Wild Bunch head Vincent Maraval for help tracking down the artist. “Around the time of Ponyo I visited Studio Ghibli,” Maraval reportedly said. “Miyazaki showed me Father and Daughter and said ‘I want you to find the director for me.’ I said that would be complicated. He replied, ‘If one day Studio Ghibli decides to produce an animator from outside the studio, it will be him.’

“On my return, the head of acquisitions tracked down Dudok de Wit and we visited him in London to ask if he would be interested in doing a feature. He said he wasn’t but we added: ‘Too bad, Studio Ghibli wants to produce it,’ and his eyes lit up.”