Produced in partnership with MONDO, the adult comedy series premieres on VRV this spring. 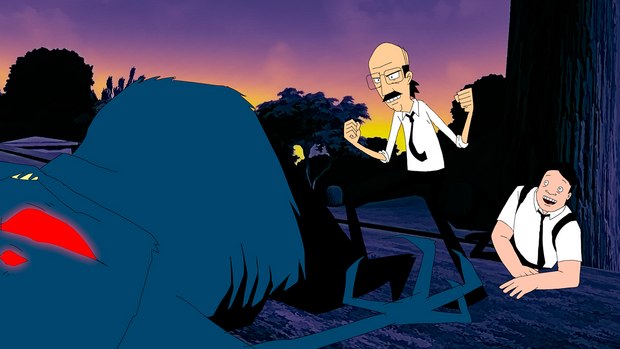 Based on a short-form pilot from the Bite on Mondo Incubator, Gary & His Demons is produced in partnership with Los Angeles-based MONDO. The series is set to premiere on MONDO’s channel on VRV in the spring.

As part of this announcement, Blue Ant International will add Gary & His Demons to its premium scripted offering to buyers worldwide in late 2018.

Gary & His Demons is an animated comedy that centers around 45-year-old Gary. He’s tired. His hairline is receding, he wears horn-rimmed glasses and he’s just chased his final demon before his long-overdue retirement. But Gary soon discovers that his boss has again failed to find his replacement and Gary will be forced to keep fighting demons for eternity. But nothing can change Gary’s fate. He’s the chosen one, whether he likes it or not.

The series is created by Mark Little, known for his work on Picnicface, Space Riders and Mr. D., and has appeared on Late Night with Conan O’Brien. Little also serves as head writer, co-director and the voice of Gary. Gary & His Demons is executive produced by Josh Bowen (executive producer and creative director, Look Mom! Productions) and Wendy Willis and Pia Chikiamco (MONDO’s Six Point Harness studio). The series is co-directed by Lou Solis, known for his work on Ugly Americans, Moonbeam City and the Secret Path.

“Gary & His Demons exemplifies the sensibility and type of character-driven animation that audiences can expect from us,” said Bowen. “Marrying Mark Little’s unique comedic voice and Lou Solis’ kinetic animation style, we found an alchemy that really differentiates Gary & His Demons.”

Look Mom! Productions announced its launch in late 2017, along with two new animated action-comedy series for the kids 6-11 category: Toy Hunters and Cloudface.