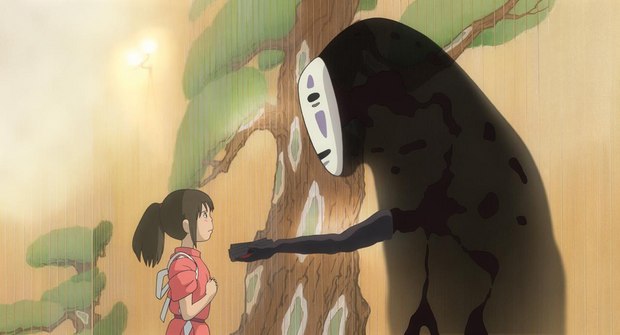 Among the new titles teaming up on store shelves for this week’s home entertainment releases, two Studio Ghibli classics -- Oscar-winning masterpiece Spirited Away and the enchanting fantasy-adventure The Cat Returns  -- have made their way onto Blu-ray.

To celebrate, AWN has obtained an exclusive set of images showing the amazing scene paintings used for Spirited Away, the 2002 Academy Award-winning film directed by Hayao Miyazaki. Feast your eyes on the gorgeous background imagery below, and be sure to check out a whole slew of new images from both films further down: From Hayao Miyazaki, one of the most celebrated filmmakers in the history of animated cinema, comes Spirited Away, the Oscar-winning triumph (2002, Best Animated Feature Film), filled with astonishing beauty and epic adventure, a dazzling masterpiece for the ages. Spirited Away is a wondrous fantasy about a young girl, Chihiro, trapped in a strange new world of spirits. When her parents undergo a mysterious transformation, she must call on the courage she never knew she had to free herself and return her family to the outside world.  An unforgettable story, brimming with creativity, Spirited Away will take you on a journey beyond your imagination.

Written and directed by Miyazaki, the English-language version is produced by Donald W. Ernst and John Lasseter. Bonus content includes an introduction by John Lasseter, as well as “The Art of Spirited Away” and “Behind the Microphone” featurettes and original Japanese storyboards, Nippon Television Special, original Japanese trailers and TV spots. Directed by Hiroyuki Morita, the visually stunning The Cat Returns features Haru, a schoolgirl bored by her ordinary routine who saves the life of an unusual cat and suddenly finds her world transformed beyond anything she ever imagined. To change her fate, she’ll need to learn to believe in herself and, in the process, she will learn to appreciate her everyday life.