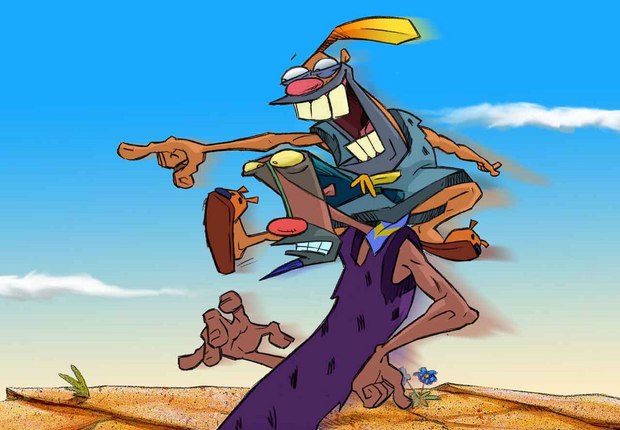 Gavrilo “Gav” Gnatovich, founder of Knock Knock Cartoons and creator of Longhair and Doubledome, announced that he is working on a graphic novel about the adventures of the two Cro-Magnon men stuck in a Neanderthal world where each modern discovery backfires – like the invention of fire or the wheel.

“Longhair and Doubledome have been wandering around the Internet for years, looking for a new home,” says Gnatovich. “But sometimes you don’t look in the right place. I want to do a third, hand-drawn episode of these guys but we have to find the caves where our audience may be hiding – so we are starting this quest with a graphic novel, first.”

In 2000 and 2003, the Cartoon Network chose Longhair and Doubledome to be a part of their “Cartoon Cartoon Summerfest” – a shorts program designed to create new television series. Fast forward to 2017, with the prodding from internet fans with the permission of the Cartoon Network, Gnatovich began to research ways of bringing these prehistoric pals back and animated again.

“I probably would have never even considered pursuing a graphic novel, if it wasn’t for some persistent fans of Longhair and Doubledome,” says Gnatovich.  After some research and knowing that there were fans these cavemen and a growing interest in traditional 2D animation, he decided to create a Longhair and Doubledome graphic novel before pursuing the production of a third animated episode.

“Today, with so many Comicons and conventions, there is a whole new generation of people out there who love to read graphic novels and are ready to meet Longhair and Doubledome,” says Gnatovich. “The beauty of this graphic novel project is that it gives me the unique opportunity to tell more of the Longhair and Doubledome back story while reaching out to new fans and also to the longstanding fans of the show.”

With the talents of Max Cannon, creator of the alternate comic strip, Red Meat serving as a creative consultant on the project, the graphic novel, The Dawn of Longhair and Doubledome is under way http://lhddshow.com. The story outline is complete and traditional drawing will be starting soon.

“I wanted to return to pencil and paper for this project… breaking pencil points is what I do best,” jokes Gnatovich. “If I really want to begin to show the value, the charm, of traditional media, this is a great way to begin. I am tired of tablets, blobby lines and Wacom pens.”

The Kickstarter crowdfunding campaign runs through Friday, April 14. For more information and to contribute to the campaign, visit the campaign page here.