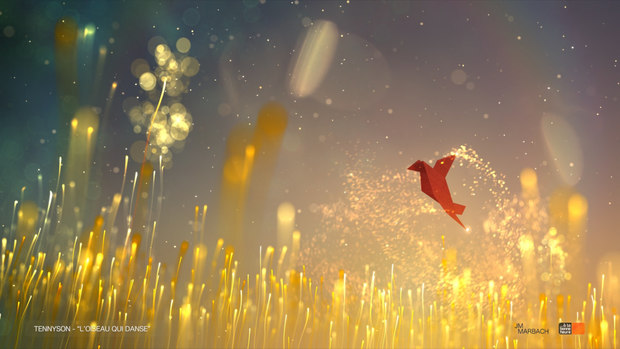 The SIGGRAPH Asia 2018 Computer Animation Festival (CAF), one of Asia's premier showcases of the year's best animated works, has announced three award-winning films as part of this year’s competition. An expert jury of professionals selected award-winning works that span the visual effects, animation, research and development, games, advertising, and education fields. The conference and exhibition, where the winning films as well as numerous other CAF submissions will be screened, takes place December 4-7 at the Tokyo International Forum. Inspired by the abstract animation style of Visual Music and created entirely with Red Giant’s Trapcode Suite, the film, animated with particles, is set to music by Canadian band Tennyson. The short features the journey of an origami bird in a mysterious field of light. Becquer’s 6-minute 2D graduate film, produced at Denmark’s Animation Workshop, is set in a contemporary society of mice and rats, where Hubert, a young observant rat, recites slam poetry full of hope within his head as he passes by individualistic strangers in the Parisian metro. Hubert´s poetry remains optimistic and persistent, despite the harsh reality of the world he lives in. The short, produced by a team of 3rd year character animation and CG art students at Denmark’s Animation Workshop / VIA University, is about a boy, tormented with grief, who battles an inescapable beast deep in the harsh countryside, where life fades with every breath.

As part of SIGGRAPH Asia’s 2018 conference, under this year’s “Crossover” theme, the CAF will showcase 38 short films and presentations, culled from close to 400 submissions. Over four days, presenters will showcase their most innovative explorations and evolutions in computer-generated animation and visual effects. From student works to professional films, the event underscores how computer animation artistry and visual technology are evolving and impacting art and culture.

“We are very proud of the robust offerings SIGGRAPH Asia 2018 Computer Animation Festival has to offer this year,” Shuzo John Shiota, SIGGRAPH Asia 2018 Computer Animation Festival Chair commented. “A diverse jury of distinguished industry leaders have chosen from nearly 400 submissions from all over the world, a truly eclectic selection of the very best digitally rendered pieces that 2018 has to offer, which will be shown in the Electronic Theater and the Animation Theater. We are also extremely happy to introduce to SIGGRAPH Asia, the VR Theater for the first time. In addition, we have around 10 production sessions that will no doubt give the audience valuable insights on a wide range of digital production; from Hollywood blockbusters by the likes of Pixar, distinct digital Anime productions by local Japanese studios, VR productions, to 64K intro productions.”

The Computer Animation Festival consists of the following main components:

Screenings. These include the Electronic Theater, Animation Theater and Invited Screenings, where the full breadth of this year’s work in computer animation can be enjoyed at length. Computer Animation Festival - Animation Theater

An in-depth exploration of the world of animation, visual effects, and scientific visualization from the last year. In the Animation Theater, all-day shows present outstanding works from around the world selected by the Computer Animation Festival's jury. A two-hour overview filled with the best animations, visual effects, and scientific visualizations produced in the last year. The jury assembled this show to represent must-see works in computer graphics.

Panels & Production Talks. Panels are organized by special invitation or selected from juried proposals submitted through the online submission process. Production Sessions feature the world's most elite and talented computer graphic experts and creative geniuses who will explain their processes and techniques for creating compelling content. They include presentations by experts on various aspects of computer animation and visual effects topics, as well as behind-the-scenes presentations by creators from the studios and schools, whose works are screened at the festival.

To register for SIGGRAPH Asia, and for more details, visit https://sa2018.siggraph.org/registration/.  Attendees can select from full week, single-day, and exhibition-only options.  Find the event on: Facebook, Twitter, Instagram and YouTube with the official event hashtag, #SIGGRAPHAsia.