If ‘Frozen 2’ is now the highest grossing animated feature film of all time, where does that leave Jon Favreau’s ‘reinterpretation’ of ‘The Lion King?’ 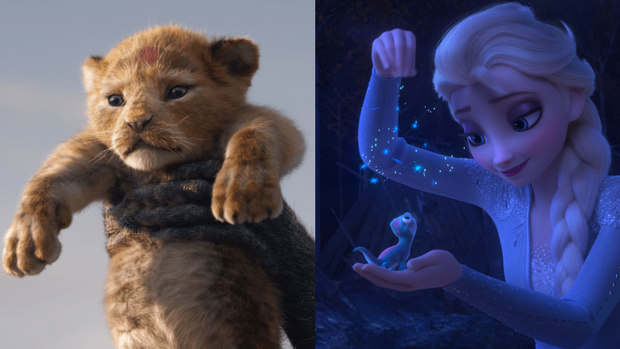 This past weekend, Disney’s Frozen 2 was crowned the highest grossing animated feature film of all time by, among others, Variety, Deadline and here at AWN. But wait a moment, you say? What about Disney’s The Lion King? Isn’t that the cat’s meow of animated feature films? Not according to the film’s director, Jon Favreau (The Jungle Book, The Mandalorian), who claims, “To say it’s animated […] is misleading as far as what the expectations might be.”

That left us scratching our heads and we can’t Let It Go! Shouldn’t The Lion King, last year’s photorealistic computer-animated remake of the beloved 1994 hand-drawn animated classic, be the clear winner? With a purrfectly huge take global take of an estimated $1.656 billion, The Lion King stampedes over the also huge $1.325 billion estimated worldwide box office haul of Frozen 2. Interestingly, many media outlets as well as Disney have turned a blind eye to the animated roots of The Lion King when it comes to how the film is defined and promoted this award season. Many have referred to the film as a live-action “reinterpretation.” It utilizes ground-breaking virtual-reality production tools, enabling live-action styled digital cinematography, alongside 3D/CG animated characters and landscapes to create its breathtaking visuals. But the film is more akin to animation than live-action, however, as none of the actors lent their physicality to the production through motion-capture; the film only used their voices. And last time I looked, live-action cat’s don’t dance! Or belt out show tunes.

Why has the film been referred to so widely as live-action? Perhaps because Disney demands it. Disney is king in the animation world, championing seven out of ten of the highest grossing animated films of all time; the family-friendly titans scored a record-setting $10 billion plus in ticket sales across all its films in 2019. Perhaps Disney wishes to pad its non-animated stats with The Lion King?

The House of Mouse may also be seeking to expand its award winning chances; The Lion King was submitted for consideration in the best visual effects category for the 2020 Oscars, making the recent shortlist… and was not among the 32 films submitted in the animated feature film category, where Disney’s Frozen 2 and Disney/Pixar’s Toy Story 4 are both heavy favorites. And don’t forget Blue Sky’s Spies in Disguise, also submitted and now, with the Fox purchase, under the Disney studio umbrella. Also consider the fact that The Lion King just received a nomination for best VFX in a photoreal feature by the Visual Effects Society.

New technologies are creating ambiguities and loopholes in the definitions of what we believe animation to be. While Disney labels The Lion King as live-action, the Hollywood Foreign Press Association disagreed, nominating the film for best-animated feature at the 2020 Golden Globes. While this debate of labels is understandable in the shifting landscape of CGI and VFX, photorealistic does not denote live-action. New technology shouldn’t redefine what is considered “live,” and if 99.9% of a movie is animated, one live-action opening scene doesn’t change the category of its format.

What do you think? Team live-action or team animation?