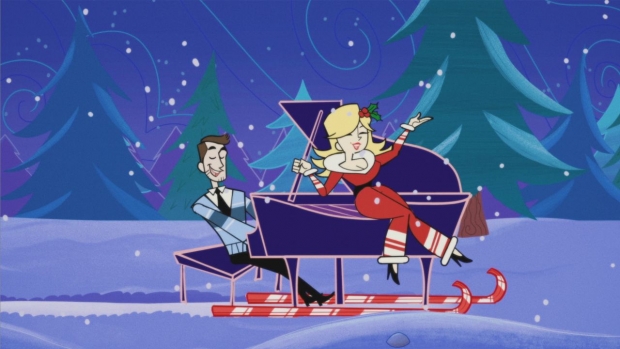 With the COVID-19 pandemic making live shoots a serious challenge, Ingenuity Studios was tasked with developing an animated likeness of Dolly Parton to capture her unique persona in a fun, flirty, and cheerful way. The iconic Parton, known for her musical legacy, is a lifelong philanthropist who has always given back to her community. In 1988 she established the Dollywood Foundation, which began by offering scholarships to local high school students. It has since grown to include the Imagination Library, which distributes free books to young children, and the My People Fund, which started in 2016 after wildfires ripped through Tennessee.

A retro, UPA-inspired version of Parton takes center stage in a trio of catchy holiday music videos for her duets with Michael Bublé, Jimmy Fallon, and Willie Nelson, respectively, as well as for a special advertising campaign for Spotify featuring animated pop-up holiday books and enhanced video content. Parton’s team loved the look so much that there is even ‘Dolly Parton’ merchandise on her official website featuring this imagery.

“We are thrilled to help Dolly Parton spread holiday cheer as we close out a challenging 2020 and look ahead to the new year,” notes Ingenuity Studios director of design + animation, Alex Popkin. “We’re proud of the team for developing a creative theme that brought out Dolly’s personality and authentic charm. They put a lot of heart and soul into this collaboration. We hope Dolly’s fans appreciate all of the little touches and easter eggs we included with great care! Of course, we hope the fans of Michael Bublé, Jimmy Fallon and Willie Nelson are also thoroughly entertained. I’m not joking when I say our motion graphics team breathes, thinks and dreams in 2D animation. We enjoyed envisioning, and then bringing to life, a joyfully animated Dolly Parton universe and some of her dear friends.” There is intentional continuity between all three music videos; Parton looks the same in each, while in the video featuring Nelson, she dons a new outfit. The team leveraged the same rigging and puppet setup as in the two videos with Bublé and Fallon. All aspects of the videos were storyboarded and hand-drawn by Ingenuity Studios artists -- from the backgrounds to the artists performing, on through to every detail of the scenes that Parton and her leading men gleefully steal.

This collaboration began with a singular music video for Cuddle Up, Cozy Down Christmas. The success of the concept for this first video enabled a much larger collaboration, and a bigger playground for Ingenuity’s artists to play in while defining a look for Parton in Christmas 2020.

Cuddle Up, Cozy Down Christmas Cuddle Up, Cozy Down Christmas tells a stylish, hip, and playful animated story worthy of Parton, and something that could be enjoyed by fans old and new. Using a 1950s character and background aesthetic (known as the UPA style), we transformed Parton and Bublé into sexy lounge singers in a timeless, rustic, snow-swept ski lodge.

Ingenuity Studios’ motion graphics team developed the original story, concept art on through to the final animation for the official music video for the song "Cuddle Up, Cozy Down Christmas" from Parton’s album A Holly Dolly Christmas. The video was created with hand-drawn 2D characters and props, with Parton and her leading men brought to life with inverse kinematic (IK) rigged characters which are essentially poseable, reusable digital puppets that obey real physics, allowing for faster, realistic, high-quality animation. All backgrounds were also carefully hand painted.

With a runtime of 3:40, this project took 5 weeks from inception to delivery, for a total of 44 shots. All I Want for Christmas is You All I Want for Christmas is You begins with Parton and Fallon chatting over a bi-coastal Vroom call (aka Zoom). Fallon wants to throw a gigantic Christmas concert special in Nashville and Jimmy wants to join her for the final number. As the countdown to the show begins, we follow both of their distinct journeys intercutting through the song, which then culminates in the big Christmas concert.

Parton’s journey is smooth, and fantasy filled, including her very own custom magical flying sleigh spreading holiday cheer and unity from high above various landmarks. Meanwhile, Fallon’s trip from New York City gets held up by a series of slapstick-laden vignettes and fun, over-the-top detours with colorful pit stops. His roundabout journey sets the stage for a dramatic, nick-of-time entrance, and as the last verse of the song begins, we end on a lavish and spectacular outdoor concert reminiscent of MGM movie musicals.

With a runtime of 4:04, this project took 5 weeks from inception to delivery, for a total of 65 shots. Pretty Paper is set in rustic Fort Worth, Texas (the town that inspired Nelson's original song) during Christmas time. We follow the duo as they ride down Main Street in a horse-drawn carriage, while playing their song. Created as a single shot, the camera stays fixed on Parton and Nelson, as the background town slowly passes by populating Main Street with fun vignettes featuring an eclectic cast of characters that tell their own tiny stories. This town is meant to be a fantasy version of the Stockyards in Fort Worth. The pace of this song necessitated something restrained compared to the previous videos; the single-shot style creates a gentle, even flow.

With a runtime of 3:33, this project took 5 weeks from inception to delivery, for a total of 4 shots, save for the two establishing shots and the final shot, the video executed as a 3:30-minute “single take.”

Ingenuity Studios’ motion graphics team developed the original story, and concept art on through to the final animation for the official music videos for Parton and Fallon’s song "All I Want For Christmas is You" and for Parton and Nelson’s duet of “Pretty Paper,” both from Parton’s album A Holly Dolly Christmas.