In a Spark & Fire podcast about his work on Pixar’s new film, the writer/director discusses the challenge and discipline of writing, and his commitment to working out the wonderful barbershop scene. 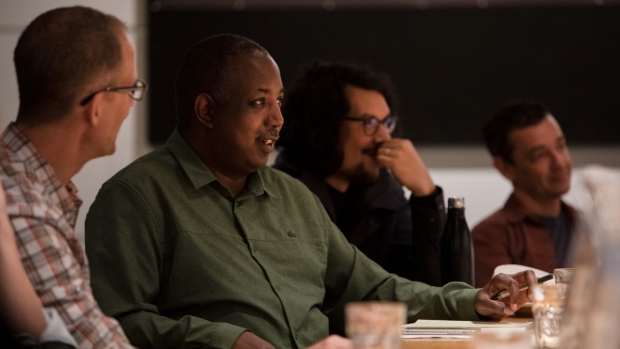 In a brand new Spark & Fire podcast, Kemp Powers and the story of ‘Soul,’ host June Cohen digs deep into the co-director / screenwriter’s own hero's journey on Pixar's first film with a Black protagonist, from his first trip to the studio’s Emeryville Pixar campus to his development of the main character – and his passionate pitch for the barbershop scene that nearly got cut from the film. Listen to Kemp tell the story in his own words, sharing creative insights about choosing ideas, and projects, that matter.

Talking about Soul, the veteran journalist and playwright says, “Writing is something that happens almost every day, and it’s happening even as the film is in animation. You’re just writing and writing and writing. You’re sitting in the edit and you have your laptop because you make a discovery and edit and very quickly rewrite lines based on what you’re seeing. And you quickly get a scratch voice actor to go into a booth, re-record those lines, and then we throw it up and edit a few hours later… Ideas can come from anywhere, honestly, anyone on the team. It’s really a group sport. It’s the ultimate form of collaboration, but as the writer, it’s your responsibility to process those ideas and actually write the script.”

Late last year, in discussing the evolution of the film’s wonderful barbershop scene, Powers told AWN, “I remember Joe getting a suit was a plot point. And I said to Pete, ‘Well, he also needs a haircut, right?’ And someone said, ‘The haircut isn't as important as the suit.’ And I was like, I wouldn't have even come up to Pixar for the interview if I hadn’t gotten lined up [had his hairline neatened up]. So, I'm gonna disagree and say, ‘That haircut is every bit as important as the threads.’”

In the podcast, Powers expands even further on the scene’s importance, and how challenging it was to nail down. “The barber sequence might be one of the two or three most reworked and rewritten scenes in the entire film,” he reveals. “I rewrote it so, so many times. It was easy to make it incredibly entertaining. It was easy to make it really, really culturally specific. But then there would just be more and more questions about whether it belonged there… I really was committed to, like, ‘Oh man, this guy, he needs to pass through authentically Black spaces,’ as I call them. And there’s no more authentically Black space in the Black community than the barbershop. It was really important that we try to represent that in the film. It was important to me. We had to figure it out.”

Head over to the Spark & Fire website for a listen – the transcript if there for your perusal as well.