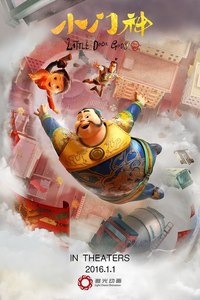 Beijing-based Light Chaser Animation announced that it has reached an agreement with Alibaba Pictures to distribute and co-finance its first animated movie, Little Door Gods.

Door Gods are guardian spirits protecting households in the tradition of Chinese folklore. Written and directed by Gary Wang, and produced by Yu Zhou, Little Door Gods is a modern-day story of two Door Gods facing unemployment in the spirit world, as ever fewer people in the human world believe in the spirits anymore. One of the spirits ventures into the human world to make trouble in order to prove his value, leading to unexpected encounters and transformations.

“We appreciate Alibaba’s confidence and commitment towards Little Door Gods, and we will work together to bring our work to the Chinese and world audience,” Zhou said.

“Little Door Gods is a top-quality film, and we are delighted to have the opportunity to work with Light Chaser on this project and leverage our strengths in promotion and distribution,” an Alibaba Pictures spokesman stated. “This project is very much in line with our strategic goal of servicing the cultural industry and upgrading its overall competitiveness.”

Little Door Gods was completed in August and will be released in China on January 1, 2016.