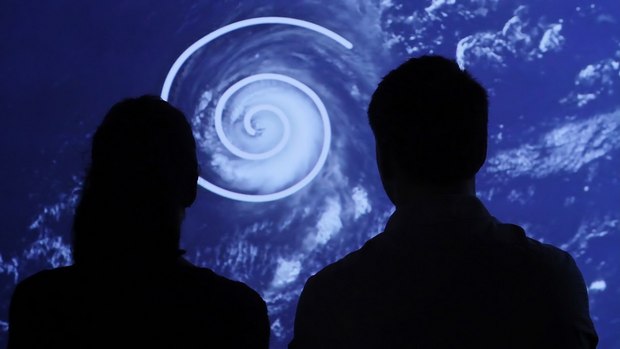 Chicago, IL -- The Museum of Science and Industry, Chicago, the largest science museum in the Western Hemisphere, offers exhibits like an enormous U-505 submarine and a full-scale home of the future.  The institution recently unveiled its permanent "Numbers in Nature" exhibit, representing its latest collaboration with conceptual design company Leviathan.  Masterfully using innovative technologies and artistic approaches in ways that are earning rave reviews, the exhibit lets visitors explore the recurrence of patterns and mathematics in the natural world through a cutting-edge film presentation and myriad interactive installations.

To immerse visitors within this subject matter powerfully, MSI Chicago commissioned Leviathan to create a four-minute long, ultra-widescreen film combining HD cinematography with mesmerizing motion graphics and visual effects, and an original score from Joel Corelitz of Waveplant.  After leaving the theater, guests engage in hands-on learning with more than a dozen interactive installations as well as a mind-bending mirror maze advancing all the ideas introduced in the film.  In a digitally enhanced two-way mirror, visitors can see if their proportions comply with da Vinci's Golden Ratio in real-time.  With other stations, visitors can virtually explore 3D spirals, Voronoi diagrams and other essential natural patterns simply by waving their hands.  Combining analog controls such as knobs, wheels and blocks with touchscreens, Kinect cameras and Leap Motion sensors, Leviathan's team designed scores of dynamic experiences aimed at engaging and educating children and adults well into the future.

"From the concept to completion, there was a fantastic emphasis on visual quality and attention to accurate scientific details from both our team and the crew at MSI," Leviathan's executive creative director Jason White began.  "Ultimately, we invented a new visual language based on MSI's designs that is educational and fits all the patterns at the exhibit's heart.  We helped design this system using white spiral, voronoi and fractal branching patterns that are superimposed over colorful footage of nature, the human body, and architecture; they are introduced in the film and used throughout the exhibit, including all the promotional materials."

To introduce this visual language in their opening film, Leviathan's artists including creative director Bradon Webb and a team of more than 20 began by leveraging the company's award-winning experience in storytelling, conceptual design, animation, editorial, and visual effects.  While the film's workflow presented some staggering challenges - involving live-action production footage captured in 6K resolution, and digital content created in up to 8K resolution using The Foundry's Nuke, Maxon Cinema 4D and Adobe After Effects - according to Webb, "There was really nothing that our team was unfamiliar with based on our past projects."

Webb also explained that each interactive installation posed its own unique challenge.  "The Leap Motion installation features nine unique 3D objects that participants can rotate by moving their hands in space, while the Vitruvian Man activity uses a Pepper's Ghost effect to display graphic information and proportions over a mirror reflection of your body's image," he explained.  "We used a Kinect camera to track bodies and then dynamically draw lines with our real-time engine."

According to everyone at Leviathan, the exhibit's interactive features were designed to address specific insights gathered by MSI's team from years of experience, so their popularity is the by-product of a very successful collaboration.

"For us, one of the most exciting aspects of this project is how well it demonstrates our interactive capabilities, particularly its success in marrying content with custom hardware and software," said Chad Hutson, Leviathan's executive producer. "While much of our most innovative work remains confidential, thanks to MSI Chicago, everyone visiting 'Numbers in Nature' can see what we're capable of."