The prolific and fiercely combative author penned one of the most famous ‘Star Trek’ episodes ever. 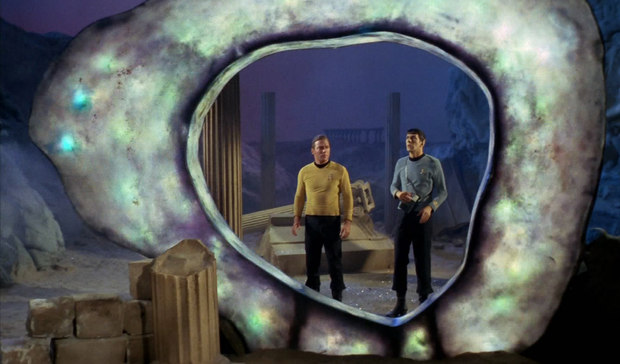 Harlan Ellison, the prolific writer behind some of the most popular science fiction stories ever written, passed away yesterday at age 84. Notoriously angry, fiercely combative and unashamedly litigious when it came to protecting the integrity and use of his work, Ellison left a huge mark on Hollywood as well as the entire science-fiction enthusiast community.

In addition to writing scripts for such TV shows as The Man From U.N.C.L.E and Voyage to the Bottom of the Sea, he penned “City on the Edge of Forever,” arguably the most famous Star Trek episode ever, where Captain Kirk and Spock travel back in time to put Earth’s dangerously altered history back in place. Kirk ends up sacrificing the life of the woman he loved, played by Joan Collins, to save Earth from ruin.

Ellison’s final script was ultimately rewritten by the Star Trek creator Gene Roddenberry and the show’s producers, which the author didn’t take kindly to. In his 1995 book, “The City on the Edge of Forever: The Original Teleplay That Became the Classic Star Trek Episode,” Ellison told the inside story of the episode’s controversy. His original version won the Writers Guild of America Award for best teleplay. The aired version won a Hugo Award. More than 40 years later, in 2009, he sued CBS Paramount Television over licensing and other monies due from that episode. The suit was eventually settled.

Among his other lawsuits, Ellison sued James Cameron, the production company Hemdale and distributor Orion Pictures, among others, for their movie, The Terminator, which he alleged contained material from two 1964 Outer Limits episodes he wrote, “Soldier” and “Demon with a Glass Hand.” The two companies settled out of court, with Cameron calling the author “a parasite.”

Ellison lent his talents to numerous TV shows, including Babylon 5, The Twilight Zone, The Sixth Sense, Tales from the Dark Side, Route 66, Ripcord and The Flying Nun. His novel, “A Boy and His Dog,” was made in the 1975 cult-classic film of the same name. Starring a very young Don Johnson, the story centered on a boy and his telepathic dog, who help each other find food and companionship in a post-apocalyptic Earth.

Read an expanded look at Ellison’s life and career over at Variety.