Pulling from events surrounding the Arab Spring uprisings, powerful new 60-minute film envisions what the Middle East could look like in 30 years. 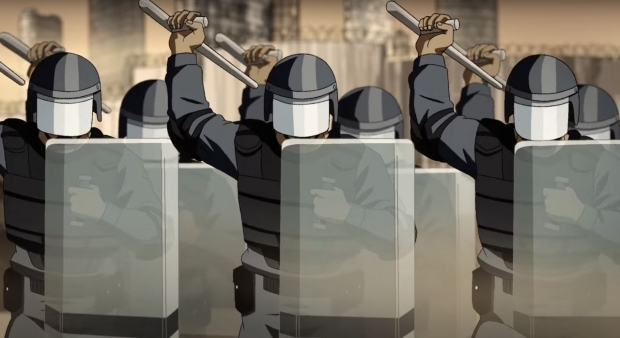 Each day brings a new project that further demonstrates animation is more than cartoon entertainment for children; it continues to engage audiences as an important medium of expression for difficult topics that transcend language and culture. One such project is Alephia 2053. Released March 21 on YouTube, the Lebanese animated thriller warns of a bloody future through a poignant commentary on the past. The 60-minute film follows a group of agents tasked with eliminating the tyrannical ruler Alaa Ibn Ismail of the fictional Arab state of Alephia in 2053. The operatives ultimately succeed in eliminating the autocracy; the story concludes as Ismail’s statue is felled by the people in an homage to the events of the Arab Spring uprisings.

“The idea for the film came from a question: What will the Arab world look like in 20 or 30 years? […] It is not inspired by any single Arab country but depicts conditions familiar to many across the world,” says creator and executive producer Rabih Sweidan to France 24. “There is always a tendency in the Arab world to imagine what might have happened in the past, but there is no theatrical or cinematic work that imagines what the Arab world will be like in the future," adds Sweidan.

In order to convey that the future is hopeful, Sweidan explains, “The film tries to express this through color grading: the closing scenes incorporate a livelier gradient than the dim and dusty scheme that dominates the first chunk of the film. […] Things can’t always remain dark.”