Learn How to Draw Captain Underpants!

Ahead of its Netflix debut on July 13, watch the opening sequence, new clips and how-to tutorials from DreamWorks Animation Television’s ‘The Epic Tales of Captain Underpants.’ 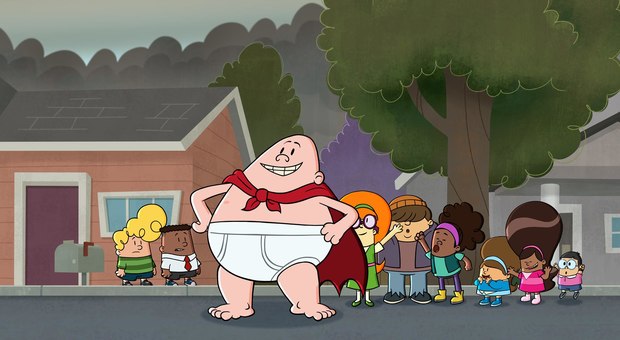 TRA-LA-LAAAA! Get your pranks and whoopie cushions ready because DreamWorks Animation Television’s The Epic Tales of Captain Underpants premieres this Friday, July 13, on Netflix!

Ahead of the series debut, here are a slew of new clips from the series along with the opening sequence and two how-to videos showing how to draw Captain Underpants and best buddies George Beard & Harold Hutchins, who continue to share a love of comic books and practical jokes – and a strong dislike for their cranky, fun-hating school principal, Mr. Krupp.

From Peabody Award and Emmy-winning executive producer Peter Hastings, the series is based on the epic novels by Dav Pilkey that have sold more than 80 million copies worldwide. Pilkey himself has praised the show saying “I binge-watched all of the episodes in one afternoon...I couldn’t help myself. Peter Hastings has totally captured the craziness and heart of the Captain Underpants multiverse and I hope everybody will love the show as much as I do. I can’t wait to watch it all again!!!”

The series provides an entire new experience for Captain Underpants fans with new storylines, crazier adventures, wilder pranks and never-seen-before villains. In the hilarious new series, each 22-minute episode is divided into short “chapters.” Along with a seemingly unstoppable villain, each stand-alone adventure contains an original comic created by George and Harold, and, just like Pilkey’s books, boasts an inventive visual style that might inspire viewers to create something themselves. In the span of one episode, they might see everything from puppets to live-action moments interspersed with the 2D animation. The Epic Tales of Captain Underpants stars both established and emerging voice talent including Sean Astin (Lord of the Rings, Stranger Things, Goonies) as the series’ narrator, and Academy-Award winner Nat Faxon (Ben and Kate, Married) as Captain Underpants/Mr. Krupp, as well as young actors Jay Gragnani and Ramone Hamilton who voice best pals, George Beard and Harold Hutchins. The series features a great additional cast including David Koechner (Anchorman) as Mr. Meaner, Tress MacNeille (The Simpsons, VeggieTales in the House) as Ms. Hurd and Mindy Sterling (Austin Powers) as Melvin’s mom, along with more.

Check out the clips, opening sequence, and how-to videos below, and show us your drawings of Captain Underpants and best buddies George Beard & Harold Hutchins on Twitter. If you decide to share your artwork, be sure to tag @AnimationWorld!

Everything Turns Into Clay!

Melvin tries to help defeat a clay monster, but somehow turns everything and everyone into clay! This is going to cost a fortune.

You know those boring school field trips where your teacher turns into a mummy and a man in underwear has to come fight her? No?

How to Draw Captain Underpants

How to Draw George & Harold