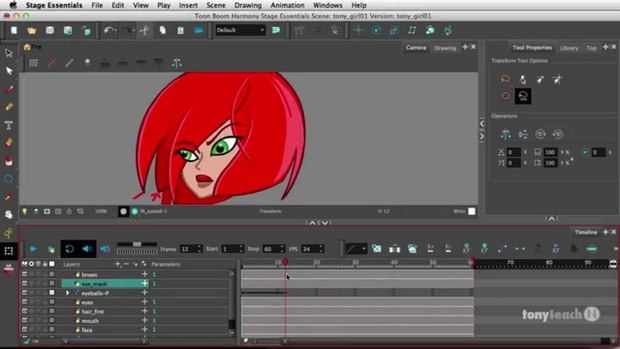 ATLANTA -- If you’ve ever wanted to learn the intricacies of character rigging in Toon Boom Harmony, here’s your chance to learn at your own pace. Designed for beginners and intermediate users, this interactive, step-by-step tutorial features character rigging and background setup that can be done in Toon Boom Harmony Essentials, Advanced or Premium.

Traditional animators, studio animators, animation students, game developers, and hobbyists can learn how to rig their characters and use bone and curve deform tools in Toon Boom Harmony from Tony Ross, founder and principal of the tutorial powerhouse, tonyteach.com. These easy-to-follow lessons cover everything from the interface and tools to creating a short scene with backgrounds and foregrounds set up in three-dimensional space.

Watch Tony work with his team of character designers, voice talent, and animators and you’ll learn to draw in Toon Boom Harmony as well as parent/child rigging, breaking your character into layers, the bone deformer, the curve deformer, lip-syncing, animating the camera, and more! Accessible and cost-effective, it’s a one-stop shop for professors and students, animation studios and advertisers to learn from the best in the business.

Tony Ross has more than a decade of professional freelance and teaching experience as a former professor of electronic arts at the Atlanta College of Art. Specializing in animation, interactivity, multimedia, motion graphics, and web applications and design, his expertise in the arts also extends to the fields of graphic design and illustration. As the creator and owner of tonyteach.com, his tutorials have been featured on Creative Cow, Toon Boom, Gomediazine, Adobe.com, Infinite Skills, Lynda.com, O'Reilly, and his impressive roster of clients has included Dabel Brothers, Marvel Comics, The Freedom Toast, and Dean Koontz.

“Anatomy of a 30-second Short: Camper, the Intergalactic Bounty Hunter,’ is available for purchase for $49.50 here. To obtain more information about Toon Boom and other software tutorials visit the Tony Teach YouTube channel.