The seventeenth edition of the Holland Animation Film Festival kicks off on Wednesday, March 19, with the Dutch premiere of Bill Plympton’s animated romantic comedy, Cheatin’. 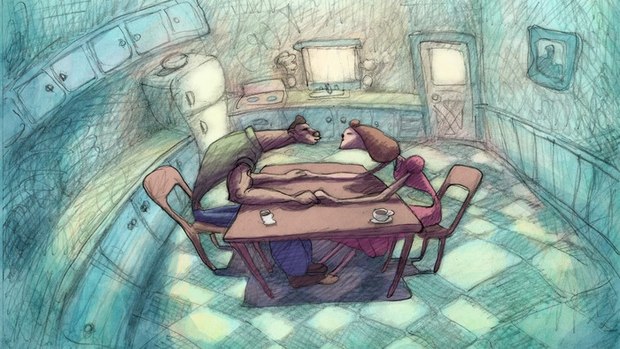 On Wednesday, March 19, the seventeenth edition of the Holland Animation Film Festival will kick off with the Dutch premiere of Bill Plympton’s animated romantic comedy Cheatin’.

When tough Jake and elegant Ella meet in a fateful bumper car collision, the sparks soon fly. Literally. The couple achieves perfection in the universal history of love and romance. However, an attractive woman drives a wedge of jealousy into their courtship.

The ‘ode to love’ evokes classical cinema, featuring über-feminine women and super-masculine men. Here, it gets a special dressing by Bill Plympton, the much-lauded and strictly independent filmmaker and uncrowned king of grotesque humor from New York. In vintage Plympton drawing style, without dialogue.

His short animation films Your Face, Guard Dog and The Cow Who Wanted to Be a Hamburger clinched Oscar nominations (in 1987, 2005 and 2010). Push Comes to Shove won the prestigious Palme d'Or in Cannes 1991.

Bill Plympton is the world’s only animator who single-handedly draws entire feature films. Since 1991, he has conceived ten full-length animation films. Bill Plympton will attend the festival.

Cheatin’ is part of the selection for HAFF’s international feature film competition. Before long, the complete selection of the seventeenth edition will be revealed.