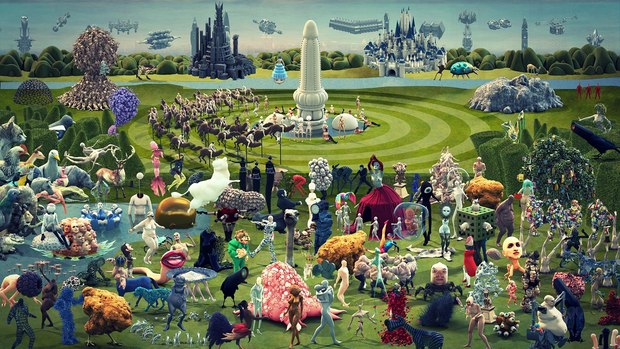 THE NETHERLANDS -- The Playgrounds Digital Arts Festival is celebrating its 10th anniversary this year! Ten years of inspiration and experiments. Ten years of amazing films, art and performances; Ten years of the most imaginative minds in digital and motion design. Ten years of the greatest artists and upcoming talents.

Playgrounds focuses on moving (digital) images in animation, virtual reality, games and visual effects. During the festival the biggest Hollywood producers and creative geniuses give up their secrets and upcoming young, international and local talent present their latest work. The mix of local and international, big and small, famous and upcoming makes up for an unique festival for everyone interested in the creative image.

Playground kicks off October 31 with an amazing line up. The filmmakers that made Coraline, Jurassic Park, The Matrix, Star Wars: The Force Awakens will give inspiring artist talks. They will share unique behind-the-scenes facts and show new work in a panel moderated by Fons Schiedon.

Some legends will be present this year. With a community of storytellers, artists, inventors, technicians, and craftspeople from around the world, LAIKA (USA) is committed to fusing filmmaking’s state-of-the-art technologies with a handmade animation tradition as old as film itself. They handcraft and transform everyday materials into living creatures infused with dimension and soul. Their Oscar-nominated films The Boxtrolls, ParaNorman and Coraline were followed by a fourth feature, Kubo and the Two Strings, which premiered in theaters this August. In 2016, LAIKA was recognized with a Scientific and Engineering Award Academy Plaque for its innovation in the use of Rapid Prototyping for facial animation. Playground 2016 is honored to welcome LAIKA’s amazing production designer Nelson Lowry.

Jurassic Park, Starship Troopers, Ghostbusters, The Matrix Revolutions, Hellboy, Star Wars: The Force Awakens. The list of films Tippett Studio (USA) worked on is endless. Founder Phil Tippett has been involved in all Star Wars films since he created a stop motion miniature chess scene for Star Wars: A New Hope. A new era for Tippett Studio emerged when they worked on Jurassic Park and changed to computer-generated imagery: a change that led to an Oscar for Visual Effects. Tippett Studio is a visionary studio that determined and instigated modern visual effects. The game industry is extremely important in the development and innovate use of animation and the moving image. Playgrounds 2016 presents Platige, a Polish based initiative with 150 art directors, graphic designers and producers. Platige shows a deep expertise in animation and special effects work. Their work is primarily focused on delivering great storytelling and that is why they constantly seek out new ways to shape narratives and experiment with new media. Their style is simple, purposeful and expressive. Platige creates cinematics for the biggest players in game industry. Think of Watchdogs 2 for For Honor and PREY for Ubisoft.