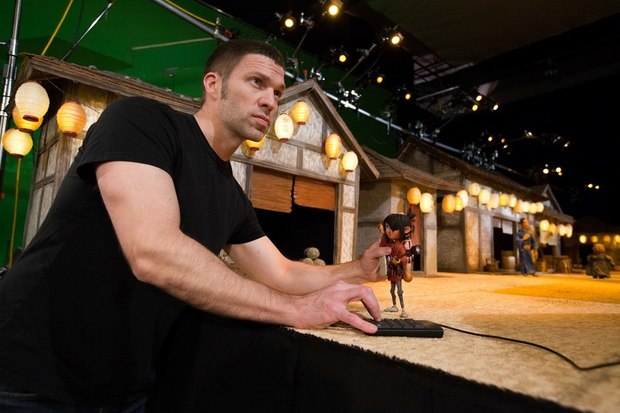 LAIKA CEO Travis Knight on the set of 'Kubo and the Two Strings,' which he produced and directed.

Travis Knight, CEO of Portland’s LAIKA Studios, whose fifth and latest stop-motion / CG feature, Missing Link, opened to a less than stellar box office this past Friday, has just signed on to direct The Six Billion Dollar Man for Warner Bros., according to Variety. Mark Wahlberg is attached to star, with Sue Kroll, Bill Gerber and Steve Levinson producing from a Bill DuBuque script.

Knight, a producer on Missing Link, directed the most recent Transformers franchise offering, Bumblebee, released this past December, which grossed over $466 million worldwide while generating mostly favorable reviews. Knight also produced and directed LAIKA’s 2016 Oscar-nominated Kubo and the Two Strings, and has handled sophisticated stop-motion animator duties on every studio film up until their most recent.

This announcement, coinciding with LAIKA’s disappointing new film release, begs the question as to how Knight will continue to juggle CEO / producing duties while developing and directing films produced at a different studio. It hard to assess whether his divided attention during a large portion of the Missing Link production was in any way a factor in the studio’s most recent stumble at the box office, especially considering the film has garnered positive reviews and word of mouth. The film is also the first studio release under a new distribution deal with Annapurna and United Artists.

The Six Million Dollar Man is based on the classic TV series of the same name that ran on ABC from 1973-1978, starring Lee Majors as a former astronaut, Colonel Steve Austin, empowered with superhuman strength from bionic implants received after surviving a horrific crash.