Get a sneak peek at the first R-rated CG-animated movie at The Cinefamily’s ‘Toons with ‘Tude Marathon’ on Saturday, August 6. 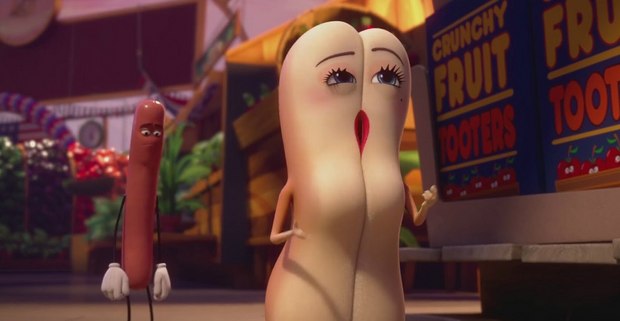 Kicking off 8:00 p.m. on Saturday, August 6th, The Cinefamily’s “Toons with ‘Tude Marathon,” dedicates an entire night to some of the most iconic animation from the crass cartoon canon. In addition to Sausage Party, the evening will also include a NSFW spin on The Cinefamily’s monthly Saturday Evening Cartoons program for kids, a Cinefamily original mix called The World's Worst Cartoon Show, and a special ninth anniversary 35mm screening of Aqua Teen Hunger Force Colon Movie Film for Theaters.

Directed by Conrad Vernon and Greg Tiernan, Sausage Party follows a hot dog named Frank (voiced by Rogan) who falls out of a shopping cart, and embarks on an eventful journey to make it back to his shelf before the big Fourth of July sale. Along the way, Frank ends up leading a group of supermarket products on a quest to discover the truth about their existence and what really happens when they become chosen to leave the grocery store.

In case you missed it, here’s the second red-band trailer, which Sony dropped on July 21:

Admission is free, but attendees must pre-register for the event on a first-come, first-serve basis. Registration does not guarantee admission or seating. Attendees will be admitted on a rolling basis from 8:00 p.m. to 3:00 a.m.