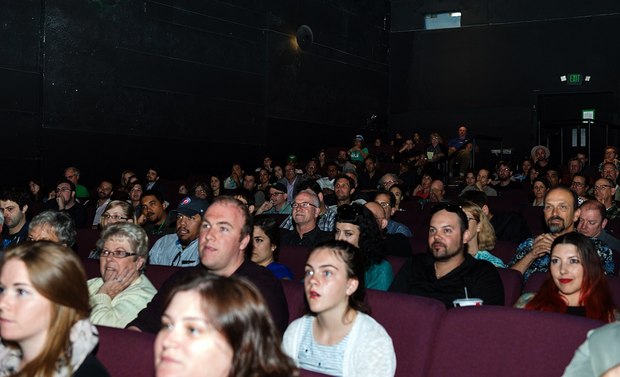 The L.A. Post Fest audience gets ready for the first film to play.

LOS ANGELES -- On May 14th, 2016 the L.A. Post Fest took over the American Cinematheque’s Aero Theatre in Santa Monica to unveil its inaugural event. Nearly 300 filmmakers, editors, post production professionals, directors, and producers packed the house to see what this new festival was all about. Created and produced by the Los Angeles Post Production Group (LAPPG), L.A. Post Fest was the screening and awards presentation for the new and innovative video post-production competition known as, “Create Your Story in Post.”  The challenge was an apple to apples competition where entrants were given the shooting script, the same green screen footage, and digital assets and were asked to edit and create their own version of the film.

Over 200 entrants submitted their versions from cities across the United States and countries across the globe including Canada, France, Italy, Belgium, Austria, Qatar, Saudi Arabia, Australia, New Zealand, and Chile.

The success of L.A. Post Fest’s launch year was due to the overwhelming support of its technology sponsors, media partners, industry organizations and friends. Platinum Sponsor, Blackmagic Design, provided their Blackmagic URSA camera for the production as well as access to their DaVinci Resolve platform. Other partners for the competition included Sony Creative Software (music), PremiumBeat (sound effects), European Southern Observatory (video footage and stills), and Kollaborate (cloud and asset management). Other World Computing (OWC) and G-Technology were Event Sponsors for the Fest at the Aero Theatre.

Michael Kammes, host of the popular web series 5 Things and Director of Technology at Key Code Media, was Master of Ceremonies for the day and used his knowledge, humor and charm to make the presentation enjoyable for all. “The excitement in the theater reminded me of why I got into the film business in the first place,” said Kammes. He was especially fascinated by the in-depth discussions among the winners about their editing choices, after the films were shown. “Each filmmaker knew the footage so intimately, that they could discuss and explore other viewpoints with other filmmakers they hadn't previously considered."

“Each submission found a different aspect of the story to highlight and the creativity was astounding. Seeing the audience’s reaction to each film as they reflected on the different choices that were made by each post team was a major highlight for me,” explained the film’s Director and Producer and Co-founder of L.A. Post Fest, Woody Woodhall. “We’re looking forward to doing it again.”

The Second Annual L.A. Post Fest Awards Ceremony is slated for May 2017.