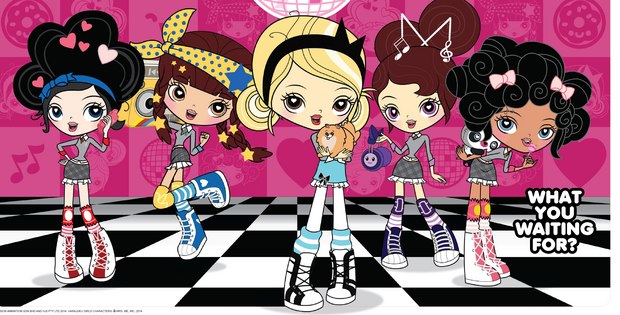 The producers, Moody Street Kids, Vision Animation and Executive Producer Gwen Stefani are creating the fun, colorful, musical world of Kuu-Kuu Harajuku (working title), a new television series commissioned by Network Ten with investment funding from Film Victoria (Melbourne, Australia) and Malaysia. DHX Media, a key player internationally in the creation of content for families and children, will handle the worldwide distribution of the animated series (26 x 22’), which is inspired by Gwen Stefani and the Harajuku Girls.

In a separate deal, Moody Street and Vision Animation have signed up Mattel as global master toy licensee.

In Kuu-Kuu Harajuku, the protagonists echo the unique style and magic of the original Harajuku Girls with animated Love, Angel, Music and Baby forming HJ5, a band driven by their inspirational leader, G. The girls are super talented but every gig is interrupted by a fantasy driven wild-card before the first note is ever played. Angry aliens, NoFun politicians, invading creatures and cute monster pets have foiled concert attempts – but G and her friends never give up. As a result, the series is a collision of cultures, a kaleidoscope of music, fashion and style.

Says Stefani, “Working on Kuu-Kuu Harajuku has been a dream come true!  It’s been incredible to see the characters and the world they live in come to life. The artwork is so beautiful and the whole series turned out better than I could have ever imagined. I can’t wait for everyone to see it! After all this time, seeing the Harajuku Girls come to life in an animated series has been an amazing experience.”

Gillian Carr, MSK, Managing Director, says, “Developing Kuu-Kuu Harajuku with such a talented group of people from around the world has been an absolute joy; the team are loving every minute of it. Gwen’s love of all things Harajuku is contagious!”

Huoi Seong Low, CEO of Vision Animation, states, “Everything about the project has been magical, from the pitch to Gwen Stefani through the development of the characters, the environments, the stories and of course, the animation itself.  Everyone on the project is super inspired and that energy is translating well into what you will see on screen!  We have never been happier with a show!”

Cherrie Bottger, Head of Children's Programming for Network Ten, says, “We are absolutely delighted to have this entertaining, colorful series, Kuu-Kuu Harajuku join our kids’ block on our digital channel ELEVEN”.

Josh Scherba, SVP Distribution at DHX Media, adds, “Kuu-Kuu Harajuku is fun, energetic and unique, and the inspiration for the series draws from a range of cultures as well as Gwen’s own distinct visual imagination. Our team is excited to be distributing this completely original series around the world.”

Doug Wadleigh, SVP and GM at Mattel, says, “The unique Kawaii world of characters paired with the engaging musical narrative of Kuu-Kuu Harajuku has inspired us to create a truly distinguished line of upcoming dolls and toys.  We’re very excited to be a part of the global creative team that brings this new franchise to life.”