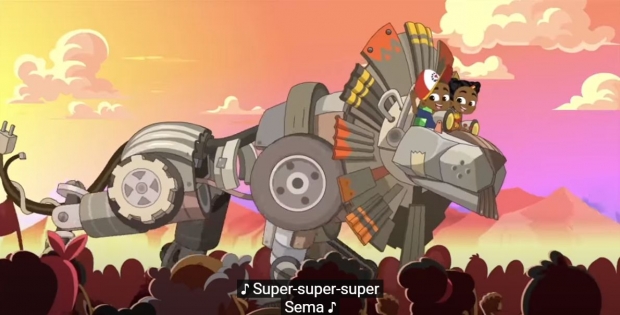 Check out the show:

"I share Kukua’s goal to empower children through inspiring stories that feature characters in which the children see themselves reflected,” shared Nyong’o. “I am delighted to be a part of this talented, female-led team of purposeful creators. As a Kenyan, I couldn't be prouder of Super Sema’s introduction to the world and the opportunities Kukua provides for our local creative community to produce entertainment that reflects our culture.”

“We are thrilled to announce that Lupita is a part of our company and our mission to empower children with the skills and capacity to dream beyond what they think is possible and to imagine and create a better world,” commented Bisignani. “Our team couldn’t be prouder to partner with Lupita, whose voice and talent has already inspired millions across the world. Together, we’re excited to build the next big global kids’ franchise, starting with the Super Sema animated series. Our aim is to continue to create content and products that inspire children to take what they’ve learned from Super Sema into the real world to invent, create, and play.” In each episode, Sema and her twin brother MB use their “technovating” powers to save their town of Dunia from a heartless robot uber villain. From their Secret Lab -- an amazing den of invention and ingenious recycling -- they code world-changing apps, create energy from waste, engineer solutions for their community, develop virtual worlds, and might even launch a space rocket, but be home in time to print 3D pizzas! The first eight episodes will debut on March 8, 2021 and the remaining twelve episodes will be released throughout March and April.

“74% of characters on TV remain white and only a few portray black female leads in STEAM,” added Kukua’s COO Vanessa Ford. “As a black girl growing up in North America who majored in science, I didn’t see anyone that looked like me when I watched cartoons or walked into a chemistry class. Today when my children turn on their favorite program, I want to know that they not only can see themselves positively reflected on screen, but that they are emboldened to believe they too can be scientists, inventors and change makers. Sema is the role model for today’s generation of children.”