Crunchyroll and Fathom team up to for an exclusive movie night in over 600 cinemas across the US. 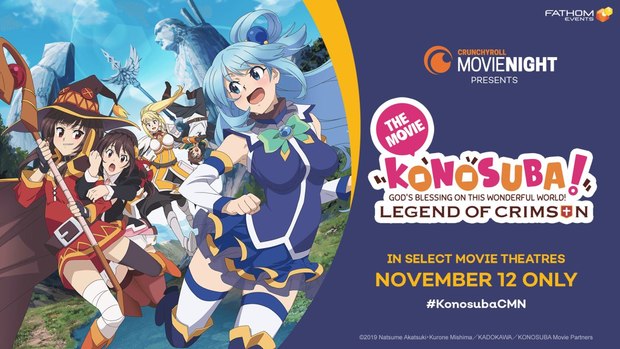 Crunchyroll and Fathom events have announced the theatrical release of KONOSUBA! God's Blessing on this Wonderful World! Legend of Crimson, coming to movie theaters on Tuesday, November 12 at 7:00 PM local time. Screening in over 600 movie theaters nationwide, this debut offers fans a behind the scenes look at the new film, featuring interviews with Jun Fukushima (voice actor of Kazuma) and Rie Takahashi (voice actor of Megumin).

“Crunchyroll Movie Nights are a powerful way for anime fans to connect with other fans in the Crunchyroll community,” commented Crunchyroll head of events, Mary Franklin. “We are excited to present this new Konosuba film for them, which we're bringing to the U.S. only months after its premiere in Japan.”

To mark the film’s launch in the US, Crunchyroll is also releasing an exclusive Konosuba capsule collection featuring six items, including a special tee with artwork from the upcoming film. The collection will be available in early November at the Crunchyroll Store.

Crunchyroll Digital Drops is also releasing a new app featuring a sticker collection to celebrate the film. The limited Konosuba-themed sticker pack includes chibi style art of Kazuma and the adventuring party and can be found by downloading the app. Additional limited-edition Digital Drops stickers will be given away in theaters.

In KONOSUBA! God's Blessing on this Wonderful World! Legend of Crimson, a video game-loving shut-in, Satou Kazuma’s life should have ended when he was hit by a truck, but through a twist of fate, he ends up reincarnating in another world--and dragging the troublemaking goddess, Aqua, the wildly dorky mage, Megumin, and the unrelentingly delusional lady knight, Darkness, with him.