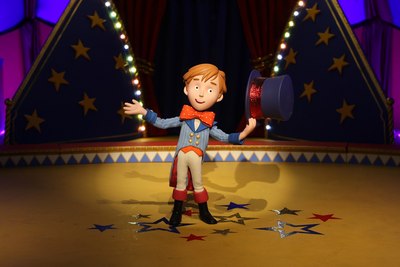 The announcement comes as licensing agency Metrostar takes this pre-school brand to worldwide licensees and retailers at 2016 Toy Fair. The pre-school animation has been sold to over 30 territories, making it a global success and an enormously popular program for 3-7 year olds, making it hot property at Toy Fair.

Andrew Cole-Bulgin, joint CEO and Head of Film & TV, Komixx Media Group commented, “The success we continue to see with Toby is a testament to a program children all around the world love and adore. We are thrilled Metrostar will be representing Toby at Toy Fair, we’re confident they’ll be able to further grow the success of the brand.”

Claire Potter, Managing Director at Metrostar added, “Toby already has a great international TV platform which is strengthened further by the addition of Rai Yoyo. This is so important for toys and we’re looking forward to sharing this news at Toy Fair.”

Toby’s Travelling Circus is an animated series aimed at 3-7 year olds, following the charismatic Toby, a seven-year-old boy who is the Ringmaster of a travelling circus and fairground. With his mischievous toy monkey Momo by his side, Toby has to make sure he and his friends put on a spectacular show for the audience everywhere they go. Toby’s Travelling Circus is produced in the UK by Komixx Media Group and developed with stop-motion animation by Manchester-based production company MacKinnon & Saunders.

The acquisition was sold through Adam Selly at Union Media and Caterina de Mata at Light and Color.

Komixx Media Group has a reputation for developing and producing media content across all platforms spanning from home television, cinema, online, on-demand, mobile media and live events including Princess Poppy, Fish-Head Steve and Wanda and the Alien.