Online petition asks AIF organizers to ‘say NO to toxic and violent behavior against women.’ 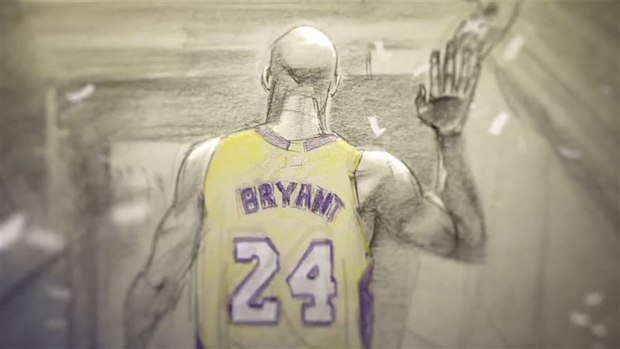 Winner of the 2018 Academy Award for best animated short, ‘Dear Basketball’ was written and narrated by Kobe Bryant and directed and animated by Glen Keane. Legendary composer John Williams provided the score.

In the wake of an online petition urging organizers to drop retired NBA star Kobe Bryant from the second annual ANIMATION IS FILM Festival jury, Variety reports that the festival has done just that.

The ANIMATION IS FILM Festival, which aims to “fill a gap in the U.S. market by establishing a world-class animation festival on par with the major events in Europe and Asia,” was launched in 2017 by independent animation distributor GKIDS, the Annecy International Animation Film Festival, and Variety magazine. The second edition of the Festival runs this weekend, October 19-21, at the TCL Chinese Theatres in Hollywood. Bryant upset last year’s Oscar race for Best Animated Short Film, winning an Academy Award in March for Dear Basketball, which he wrote and produced alongside legendary animator Glen Keane. Following the film’s nomination, a petition asking the Academy of Motion Picture Arts and Sciences to rescind Dear Basketball’s nomination due to accusations of past sexual misconduct against Bryant garnered more than 12,000 signatures.

Bryant was arrested and charged with sexually assaulting a 19-year-old employee of The Lodge and Spa at Cordillera in Eagle, Colorado in July 2003, but the charges were later dropped when the accuser declined to testify. A civil suit between the parties was settled for an undisclosed sum and a public apology from Bryant, who claimed the encounter was consensual.

Posted last week on Change.org, the new petition urged the ANIMATION IS FILM Festival to remove Bryant from the jury: “We, women and allies of the animation community demand that accused rapist and sexual predator Kobe Bryant be removed from the Jury of Animation is Film Festival. In light of the #MeToo movement, there has been little to no recourse for Kobe Bryant’s actions of sexual assault. We demand that GKIDS, Variety, & Annecy revoke their complicity in enabling a sexual predator to continue a life without any accountability both as an individual and a celebrity. On its website ‘Animation Is Film’ specifically states one of their primary purposes is to champion and support women filmmakers. It’s time to turn these words into action,” the petition reads.

“This is an urgent time to say NO to toxic and violent behavior against women. Keeping Kobe Bryant on the jury sets a precedent of lenience for sexual criminals and further undermines the visibility and respect that victims of harassment and assault deserve,” the petition continues.

The ANIMATION IS FILM Festival, for its part, hopes to keep the focus on the films and filmmakers at the second edition. “After discussions with the various stakeholders of Animation Is Film, the decision has been made to remove Kobe Bryant from the 2018 jury. We are a young organization and it is important to keep our collective energies focused on the films, the participating filmmakers, and our festival attendees,” GKIDS CEO Eric Beckman said in a statement.

Brant is reportedly still resolved to continuing to work within the animation community. “I was honored to have been originally invited by Animation is Film to serve on the 2018 Jury, and am disappointed to no longer serve in that capacity,” he said in a statement to Variety. “This decision further motivates me and my commitment to building a studio that focuses on diversity and inclusion in storytelling for the animation industry. I remain focused on changing the world in positive ways through diverse stories, characters, and leadership, in order to inspire the next generation.”