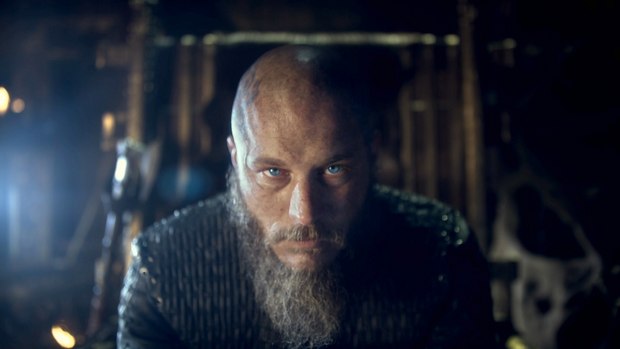 This project was a perfect fit for King and Country as it not only meant working with longtime creative partner History, but also allowed them to complete all aspects of production in-house, including the shooting, directing, writing, editorial, design, animation, CG, VFX, color and finishing for the two 60-second spots and 30-second cutdowns.

In the spots, Ragnar and Lagertha each experience premonitions of their fate. Ruminating on the nature of power from their respective thrones, they look out to a hauntingly surreal banquet filled with enemies and allies. As Ragnar accepts his possible fate, the revelers suddenly disappear, replaced by deadly snakes creeping in on him. A close-up of his intrepid face reveals a reflection of a viper poised to strike. For Lagertha, those same feast-goers collapsed around her in death. The camera pans back to show her surveying the carnage, with a bloody dagger in her hand.

King and Country developed the original branding and iconic logo for Vikings when the series debuted in 2013, so they were intimately familiar with the series.

“History came to us with their concept and scripts for the project and were looking for a partner they could trust to shoot halfway around the world,” says K&C partner/executive producer Jerry Torgerson. “They know the high level of creativity and attention to detail that our directors put into their work. We were there at the launch of Vikings and have been huge fans since, so it was amazing to work with them again.”

The shoot took place over the course of two days on the Vikings Ashford Studios soundstage in Wicklow, Ireland, while the new season was still in production. K&C’s main production challenge was working around the show’s filming schedule because they were utilizing the same location, crew, props and talent. This meant planning for as many variables as possible in advance, so they could adapt quickly to the availability of the cast, crew, and stage.

Because the power of the spots comes from the intimacy of the internal monologues, K&C partner and director Rick Gledhill says they never let production techniques get in the way of the characters and the audience.

“After working so closely on the show’s branding, it was great to get the opportunity to work up close and personal with the actors and frame them through our lens,” says Gledhill. “The beauty came from a balance of subtle cinematography, art direction and the incredible lighting and compositing achieved by our team.”

King and Country shot with the Red Epic Dragon attached to a Technocrane to allow them to move quickly through two shoot days. They shot live-action plates of the environment and snakes on set before augmenting everything in post. K&C was after a different look aesthetically than the show, so along with the already rigged lighting for the set, they used candles, open flames, and flame bars. In post, they used Premiere, Maya, After Effects and Nuke to create the layered composites, animated snakes and rich palette showcased in the final spots.

“It's clear to see why this show has been such a huge success,” concludes K&C partner/director Efrain Montanez. “The level of commitment and dedication that everyone brings to their roles, whether they're the talent or the crew, is truly inspirational.”