Production company reteams with legacy client for five-part miniseries based on the Texas Revolution against Mexico and the birth of the Texas Rangers. 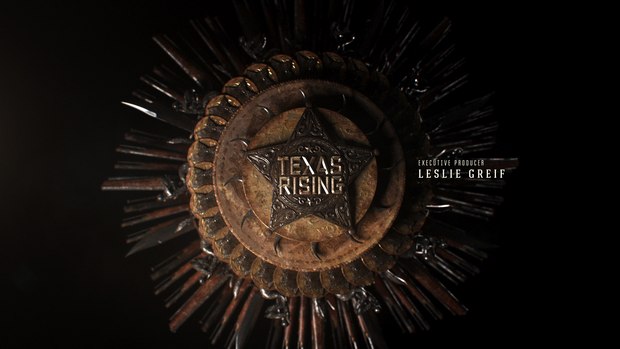 Santa Monica, CA -- King and Country (K&C), a full-service, design-centric production company, recently created the main title sequence for “Texas Rising,” a five-part television miniseries based on the Texas Revolution against Mexico and the birth of the Texas Rangers that premiered on History on Memorial Day, May 25th. Directed by Roland Joffé, and starring Bill Paxton, Jeffrey Dean Morgan, Ray Liotta, Brendan Fraser, Olivier Martinez and Cynthia Addai-Robinson, “Texas Rising” is the latest in K&C’s long line of collaborations with History, including the ratings record-breaker “Hatfields & McCoys,” as well as “Vikings,” “Houdini,” “American Pickers” and “Gangland Undercover.”

“King and Country are incredible production partners,” says Krista Liney, VP, On-Air for History. “They give careful thought and consideration into each project they undertake. The creative is always unique and on brand, which is not always an easy balance to strike. These are not the kind of guys who paint by numbers. We have had such immense success with King and Country in the past that they were our first call.”

For “Texas Rising,” History wanted a fresh take on the Western genre, with a visually stunning open that also offers some insight into the narrative. The two-minute main title sequence, built and animated by K&C entirely in CG, chronologically depicts historical moments of the series’ eight fundamental plot points in highly detailed and layered graphic arrays that twist, change and unfold to reveal many hidden details of the story chapter by chapter.

The main titles open on a graphic representation of Sam Houston’s Army, the flags weathered and the weapons worn from months spent at war. As the Texian swords retract in front of the backdrop of Goliad, the next array reveals they are surrounded by Mexican cannons, symbolizing their retreat and subsequent massacre. An array of gold uniform detail surrounding Santa Anna’s sword and medal is subsequently woven through with Emily West’s lace and yellow roses symbolizing her seduction and betrayal of the political and military ruler of Mexico. As Santa Anna’s blood spills from his medal and down his sword, it in turn ignites the battle and victory at San Jacinto. The story continues through to the failed militarization and ensuing destruction of the Comanches. The final scene shows the Mexican coins turning over to reveal an array of tin stars, a lasting symbol of the official birth of the Texas Rangers.

“When History approached us to create the main titles, we responded with an idea steeped in metaphor and driven by narrative that really set the stage for this epic story,” says Rick Gledhill, K&C’s Director and Creative Director. “It’s a modern approach to a classic genre. It’s darkly beautiful and it’s magic lies in the details. Every single element of the show, down to the smallest button, is damaged, tarnished and war-torn, and great care was taken to make our models and textures true to both the show and History.”

“Every frame of the array design is full of symbolic details,” adds Liney. “King and Country’s research and level of creativity were truly impressive.” The complicated title sequence required making over 50 photorealistic computer-generated models and duplicating them hundreds of times to make the elaborate repeating pattern arrays. K&C addressed these challenges by prepping all shots beforehand and creating a custom model referencing system that allowed for the large volume of models to be worked on simultaneously with layout, animation and rendering.

The most challenging part of the process was to achieve an extra layer of realism by adding depth of field to all the shots, which helped give the illusion that the arrays were shot with a real camera. Had they been built in real life, each would have been a four-foot art piece, not allowing for adequate depth of field, especially in extreme close-ups. K&C chose to render it photographically accurate with CG with its final output tallying more than 15,000 rendering hours to create the beautifully complex images.

K&C was also tapped by History to create the miniseries’ promo package, which involved using cinematic live-action vistas from the show’s shot footage and incorporating elegant yet gritty animated typographical title cards for the promo toolkit.

“We were happy to collaborate with History again on another epic project like ‘Texas Rising’,” says Jerry Torgerson, K&C’s Executive Producer and Partner. “Over the years, the strong relationships we have created have allowed us to be a part of some of their best work. It says a lot to K&C that History continues to place such enormous trust in our concepts and creative team to deliver beyond big.”