Riki Lindhome co-writes (with her ‘Garfunkel & Oates’ co-star Kate Micucci) and performs the show’s first ever production number as her character finds new popularity after finally getting her braces removed; ‘Off to the Braces’ airs this coming Monday, August 16 on FOX. 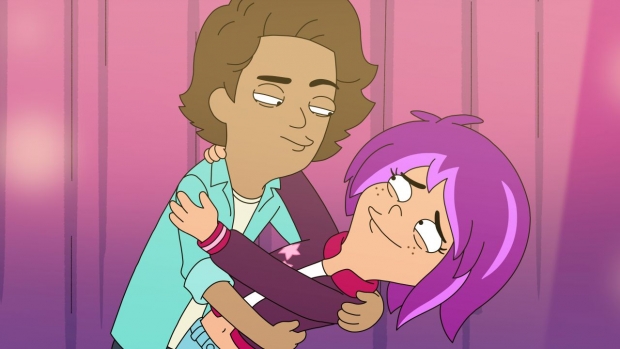 It’s Duncanville clip time. But this week, with the show returning from an Olympics mini-hiatus, we’ve got a special treat. Riki Lindhome, who voices Duncan’s sister Kimberly, co-wrote - with her Garfunkel & Oates co-star Kate Micucci - and performs the show’s first ever production number in jubilant celebration of finally getting her braces off, in the all-new episode, “Off to the Braces,” airing this coming Monday, August 16 (9:30-10:00 PM ET/PT) on FOX. Their music was also used in a tag at the end of the episode for a special musical number featuring Mr. Mitch (Wiz Khalifa).

Animated by Bento Box and produced by 20th Television Animation, Universal Television, and Fox Entertainment, Duncanville is co-created, and executive produced by the Emmy Award-winning husband and wife team of Mike and Julie Scully, and Emmy Award winner Amy Poehler.

Regarding the new episode, Lindhome tells AWN, “I just feel incredibly fortunate. I get to voice such an amazing, emotional, hilarious character. And on top that, to be able to write a musical number for her and perform it- it’s all a dream come true. And then the dream only got better when they told me Wiz Khalifa was going to perform a reprise of the song. Mike, Julie and Amy really support and nurture everyone’s talents and it’s very cool to be in that company.”

Mike and Julie Scully add, “We're very excited to be back from the Olympic break with a new episode featuring our very first production number, a song sung by Kimberly (Riki Lindhome) about getting her braces off called ‘I Can Finally Put Anything In My Mouth’ and a hilarious reprise sung by Mr. Mitch (Wiz Khalifa).”

Check out Kimberly breaking into song, sans braces, as she belts out, “Look at me, I’m Kimberly… with a metal-free oral cavity,” in “I Can Finally Put Anything in My Mouth!”