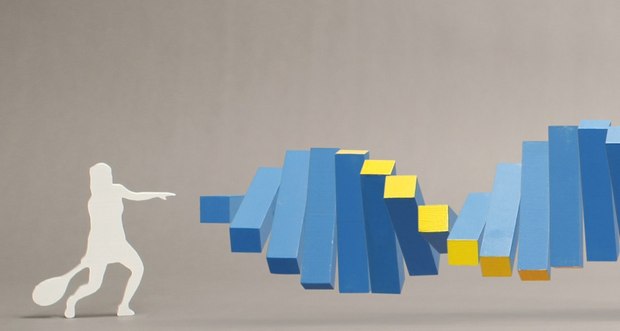 The stop-frame film, co-produced by Strange Beast and Passion Paris, plays on a seamless loop and was specially created for projection onto a 20-metre-wide space. It features two characters playing tennis, with the ball’s ‘trace’ through the air made tangible with colourful shapes, and comprises almost 17000 still images.

Kijek / Adamski were approached to create the film by director Yves Geleyn, curator of the unique exhibition that celebrates handmade craft in animation and features films by numerous high profile international directors along with exhibits of the physical elements that were used in their production. Trace is placed high in the Motion Factory space, tying the exhibition together.

“The brief was very open because there were mainly only technical guidelines. We were given a blank canvas and basic information about the context it would be put into,” recall Warsaw-based Kijek / Adamski, aka Katarzyna Kijek and Przemyslaw Adamski. “We decided to use simple shapes as they work best when it comes to multiplication and rhythm. We also find them very playful and it was pretty much our point to make the piece cheerful and energetic.”

“At first the most challenging aspect was dealing with the proportions of the screen and making the film display in the proper way. We were happy to hear that we weren’t responsible for adapting the video to screen through four projectors,” they remember, although there was a lot of hard work to come. Despite the labour-intensive nature of the project the directors took on most of the work themselves, hiring just two friends to help paint the 1980 Styrodur pieces that feature, 480 of which were human silhouettes. “The other challenge was dealing with the numbers: 1980 elements to paint, 17000 pictures to take and the size of the final frame – 4702 pixels wide. We were very cautious about choosing the best camera and lens for the shoot and ended up using a Canon 5DII with a Canon 50mm f/1.2 L for its optical resolution.”

Although Kijek / Adamski put an enormous amount of effort into the project, they’re quick to praise the other contributing parties, “We’d like to say huge thanks to everyone involved in preparing this exhibition; to Yves Geleyn for inviting and trusting us, to La Gaîté lyrique, to Strange Best and Passion Paris for their huge support and, last but not least, to all participants for their great contributions and special thanks to those whom we had the pleasure to meet in person. It's an honour to be a part of this event.”