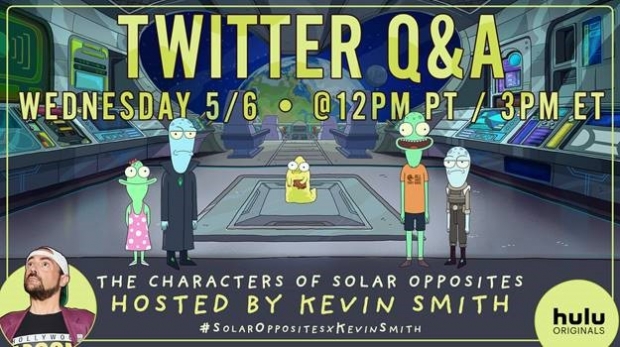 With Justin Roiland and Mike McMahan’s new animated comedy, Solar Opposites, premiering May 8 on Hulu, we’re only a few days away from finally gleaning answers to some of the burning questions about the show we’ve been painfully suppressing all these months. Like, “Hey, Korvo, why do you sound pretty similar to Rick / Morty from Rick and Morty?”

But, now, our wait for enlightenment has been cut from four days down to a mere one, as Hulu has just announced that tomorrow, May 6, at 12:00 pm PST/ 3:00 pm EST, writer, director, and fashionably chic backwards baseball cap-wearing podcaster Kevin Smith (Jay and Silent Bob Reboot, Comic Book Men, SModcast) will moderate a mind-altering, animated Twitter Q & A with the alien stars of Solar Opposites: Korvo (Justin Roiland), Terry (Thomas Middleditch), Jesse (Mary Mack), and Yumyulack (Sean Giambrone).

Some of the most pressing questions sure to be posed: What’s it like being stuck on earth? How far away is Shlorp? Strangest moment yet living on Earth? Can you be sent to prison if you don’t have a butthole?

In this first-ever animated Twitter Q & A, the Shlorpions will answer a series of questions, in character via video from the @Hulu Twitter.

And, feast your eyes on the Official Solar Opposites trailer below!

As we see in the official trailer, you’re too late if you’ve finally figured out you can’t go to prison if you don’t have a butthole; Roiland and McMahan beat you to that stunningly odd conclusion. We’ve have learned more about the team of four aliens who escaped their exploding home world, only to crash land into a move-in ready home in suburban America. They have a shrink ray, gear to fabricate new best friends, and a penchant for coaxing bloody mayhem out of even the smallest human cultural ironies.

The four are evenly split on whether Earth is awful or awesome. Korvo and Yumyulack only see the pollution, crass consumerism, and human frailty, while Terry and Jesse love humans and all their TV, junk food, and fun stuff. Their mission: protect the Pupa, a living supercomputer that will one day evolve into its true form, consume them and terraform the Earth.