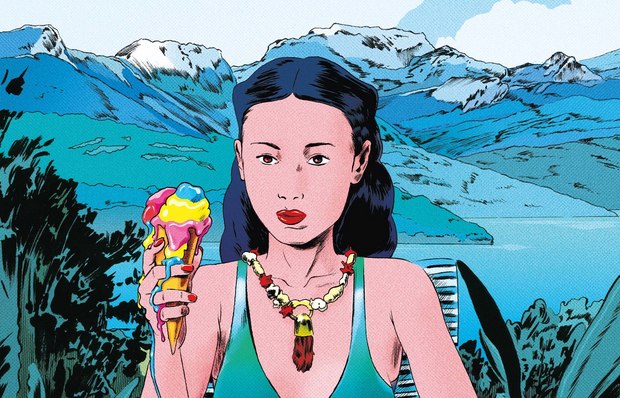 Organizers of the Annecy International Animated Film Festival have unveiled a new poster for the 2017 edition, running June 12-17 alongside the MIFA animation marketplace.

The creation of the festival’s official poster was entrusted to French artists and illustrators Kevin Manach and Ugo Bienvenu, alumni of GOBELINS, l’école de l’image, CalArts and, for Bienvenu, Les Arts Décoratifs.

This practically inseparable duo cultivates a contemporary experimental style that’s reminiscent of comic books from the 1940s and 50s. They have lent their talents to music videos for acts such as Jabberwocky, Renart and Agoria, as well as intriguing and promising shorts like Une île, Vésuves and Maman, and commercials for brands including Hermès, Marvel and Disney.

Their unique and extremely rich aesthetic has brought them new and exciting opportunities like working on the upcoming feature film Domenica, produced by Miyu Productions, which is currently in development.

“When we heard about this year’s highlighted themes (China as guest country and erotica), we immediately thought of Jade, Ugo’s wife who has Chinese roots,” Manach and Bienvenu commented, speaking about their inspiration for the project. “We stared at her through the bay window: she was eating a ham sandwich out back in the garden. We replaced the sandwich with an ice-cream cone, the garden with Lake Annecy, and voila!”