Directed by Jay Martin and animated by Ingenuity Studios, the short depicts a budding holiday romance with a throwback melody. 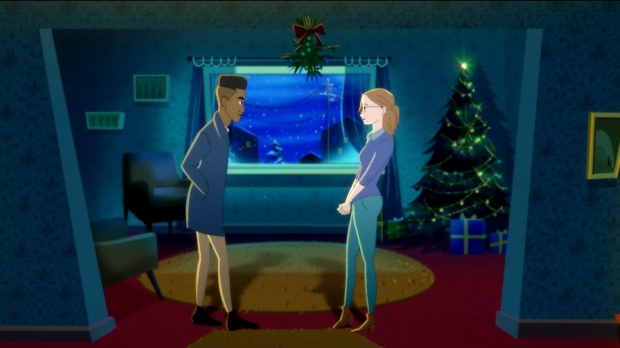 Grammy-winning singer-songwriter Kelly Clarkson and acclaimed country singer-songwriter Brett Eldredge have released a new hand-drawn animated music video of their holiday duet, Under the Mistletoe. Directed by Jay Martin with animation by Ingenuity Studios, the song, and short, co-written by Clarkson and produced by longtime collaborator Jesse Shatkin (Sia, Jennifer Lopez), depicts a budding holiday romance with a throwback melody sure to bring people together this holiday season. Since release, the track has generated over 22 million global streams (becoming the top streaming on-demand audio Christmas track released in 2020 as of last week) and climbed into the Top 10 on both the Hot AC and Holiday radio charts. Clarkson has also released a cover of the Vince Vance & the Valiants’ classic “All I Want For Christmas Is You” this holiday season, which you can stream here.

According to Martin, “I love working with Ingenuity Studios because I know they'll deliver what I need, and I know it's going to be great. These kinds of projects have challenges and hurdles -- yet the Ingenuity Studios team always perseveres. Dave Lebensfeld is super hands on, and his team takes his lead.”

Noting the tight schedule, the Ingenuity team created the animatic with the storyboards before handing off to the animators. “The animators had a lot of freedom,” Martin shares, “but not a lot of time for revisions. That actually made it fun because it had to happen so fast. Ingenuity's animation supervisor, Vinod Krishnan, and his squad were so great. They nailed all the little beats."

The first fully hand-drawn 2D cel animated project for Ingenuity Studios was supported by Unreal Engine - for the foundation of the house - and After Effects to achieve just the right look and feel by adding glows, sparkles, and an ethereal quality to scenes. Toon Boom Harmony was used for animation. Puppetry was used to show realistic human movement and perspectives, with hand-drawn details woven in to bring warmth and energy to the characters. All told the 4:14 short took six weeks from inception to delivery, leaving no room for error for the seven animators assigned to the project. Tremendous collaboration, organization and teamwork fueled this project from start to finish. David Lebensfeld, owner, executive producer and VFX supervisor at Ingenuity, adds, “Since we work across film, TV, advertising, and music videos, we know what tools work best for a given project. We did that for Under The Mistletoe by using Unreal Engine to give the house perspective from all angles quickly. Our background artists then added life and personality to it. So, Unreal eliminated the need for background artists to have to figure out all of the perspectives. They had the freedom to just draw which is really fun for an artist.”

According to Clarkson, “I love writing new Christmas songs that have a classic, throwback vibe. Brett is such an amazing singer, and I was so impressed by his classic sound on his Christmas record, so it was a perfect match for picking a duet partner for Under The Mistletoe.”

Earlier this year, Clarkson hosted the Billboard Music Awards for a third consecutive time and resumed her role as three-time champion coach on The Voice (to which she returned a sixth time for the show’s current 19th season). She also kicked off the second season of The Kelly Clarkson Show following a blockbuster 2019 inaugural season that marked the highest rated daytime debut in seven years, in addition to earning three Daytime Emmy Awards (including “Outstanding Entertainment Talk Show Host”), a People’s Choice Award nomination for “Daytime Talk Show of 2020,” and a Critics’ Choice Television Award nomination for “Best Talk Show.”