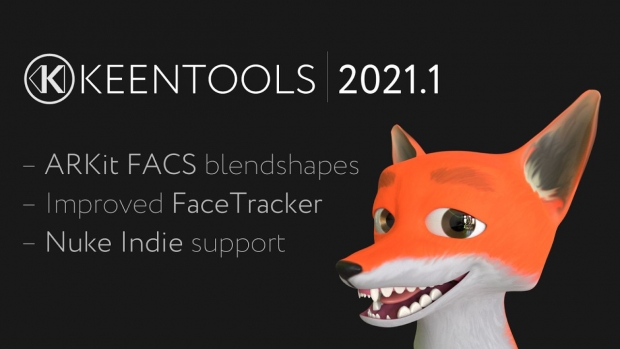 KeenTools has announced a major update with the release of Keentools 2021.1. The Blender add-on, FaceBuilder, now has built-on FACS blendshapes for head animation as well as Live Link Face app support for importing recorded facial expressions. The topology was fixed in terms of symmetry and upgraded with three different resolutions: high-, mid- and low-poly. Facial expressions of FaceTracker were significantly improved. And finally, KeenTools plugins are now available for Nuke Indie.

Changes in FaceBuilder for Blender:

Users can now animate the add-on heads with 51 of them. With ARKit-compatibility it is now possible to use Epic Games’ Live Link Face iOS app to record facial animation, export it into a CSV file, and load it into the add-on — FaceBuilder head will be animated with the recorded expressions. This works with iOS devices equipped with the TrueDeph camera, meaning iPhone X and newer models.

The symmetry in the head topology and shape has also been fixed,  improving the neck and making it easy to attach the head to a body. Also new are two useful head resolutions: low-poly and mid-poly, while the old one is now called high-poly. Switch them before and after modeling, grabbing texture and animating without losing anything. The low- and mid-poly modes will be especially useful for game development — export has been simplified, so now users only need to press the save button and then load the model in Unreal Engine or Unity with animation and texture included

Nuke users will find most of these features in Nuke as well. FaceBuilder has the same updates as for Blender except the FACS blendshapes story — it is better topology (symmetry and neck) and three head resolutions users can switch on the fly.

FACS blendshapes, the FaceTracker node can export a Live Link Face compatible CSV file with all the tracked animation. It is now easier to transfer the animation to a different model — just create ARKit-compatible blendshapes and use the CSV file to animate them. FaceTracker also has a completely new deformation model, which is much more flexible, natural, and supports asymmetrical expressions. Lastly, KeenTools is now available in Nuke Indie starting from the 12.2v4 version.

KeenTools team is offering the CG-community a 21% discount coupon for all licenses: 2021FTW. It works until January 1st, 2021. Additional information product and sales information is available HERE.