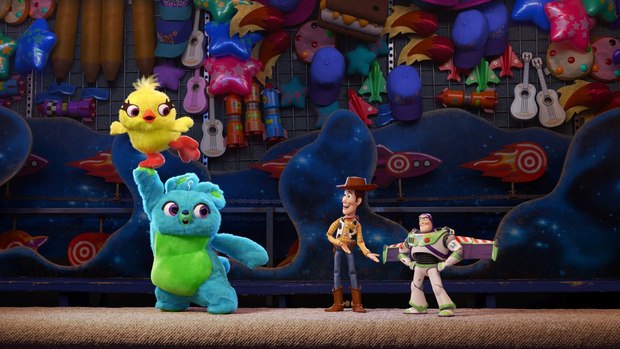 Taking aim at the just released Toy Story 4 teaser trailer that introduced us to Forky the Spork, a reluctant new toy voiced with panicked uncertainty by comedian Tony Hale, is a hilarious new "teaser reaction" introducing yet two more new characters, a pair of carnival prizes, Ducky and Bunny, voiced by Keegan-Michael Key and Jordan Peele of Comedy Central’s Key and Peele fame.

Capturing the comedic energy and fast-paced, improvisational style of their old “Valets” sketches, a reunited Key and Peele, as Ducky and Bunny, bounce about in laughter, riffing on the cinematic importance of yet another Toy Story sequel while correcting each other’s poorly-worded Buzz Lightyear impressions. Their playful, skillfully timed performances harken back to the style of humor that made early Pixar films so charming and unique. Though the two have each gone on to their own successful careers since their sketch-comedy show ended its five-season run in 2015, together again, even as stuffed animals, they flash the brilliance that won them a Peabody Award, two Primetime Emmy Awards and legions of belly-laughing fans around the world. It also got them their own Toy Story 4 poster, which you will find below!

In the new film, which hits theatres June 21, 2019, Woody’s journey includes a visit to a carnival where he meets Ducky and Bunny, two carnival prizes who are eager to be won. But when their plans are rudely interrupted by Woody and his friends, they find themselves on an unexpected adventure with a group of toys who have no idea what it feels like to be tacked to a prize wall.

According to Toy Story 4 director Josh Cooley, “Keegan-Michael Key and Jordan Peele, who voice Ducky and Bunny, are two of the most brilliant minds I’ve ever seen. Of course, they are effortlessly funny, which would be enough. But they are incredible actors that understand story. Their improvs weren’t just for comedy sake, they were story motivated which elevated Ducky and Bunny and the film to a level I never could have expected.”

Tom Hanks, Tim Allen and Joan Cusack return as the voices of Woody, Buzz and Jessie. The voice cast also includes Don Rickles, Estelle Harris, Wallace Shawn, John Ratzenberger, Jeff Pidgeon and Blake Clark. The film is being produced by Jonas Rivera (Inside Out, Up) and Mark Nielsen (associate producer Inside Out).