The ‘John Wick’ trilogy star has teamed up with Boom! Studios and a fantastic roster of artists to create ‘BRZRKR,’ a limited comic series about a demi-god fighting for the U.S. government. 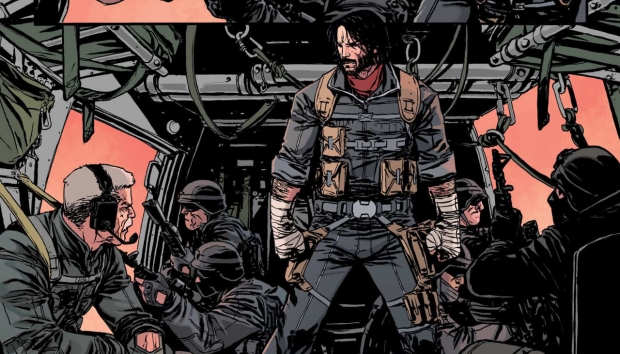 Art imitates life, it seems. Keanu Reeves (The Matrix, John Wick) is penning his first comic book series and, if the pop culture legends are true, it may be autobiographical. After all, the main character is an immortal who looks very similar to the prolific actor. Reeves is teaming up with New York Times bestselling writer Matt Kindt (Folklords, Spider-Man), acclaimed Italian artist Alessandro Vitti (Marvel, DC Comics), colorist Bill Crabtree (BRPD), and letterer Clem Robins (Hellboy) to create “BRZRKR,” a 12-issue limited series about a demi-god contracted by the government.

“After wandering the world for centuries, Berzerker may have finally found a refuge -- working for the U.S. government to fight the battles too violent and too dangerous for anyone else," the synopsis reads. In return for his service, Berzerker seeks knowledge of his existence so he can end it once and for all. Dark! According to Reeves, the comic explores, “really interesting twists and turns" while grappling with "the nature of violence, morals, ethics (and) what side do you choose."

While the comic has yet to be released, there is already buzz about a film adaptation. "I'd love to play Berzerker!" Reeves told USA Today. "It's a really fun story so if it's not me, hopefully someone can play it."

The comic series will be distributed through Boom! Studios alongside “Power Rangers” and “Bill and Ted.” Print copies of BRZRKR #1 will be available October 7, 2020 in comic book shops or digitally at the BOOM! Studios web store.