For the former ‘SNL’ writer and only woman among six executive producers on the new Netflix adult animated comedy, crass and rowdy humor must be much more than just a male voice coming out of a female character. 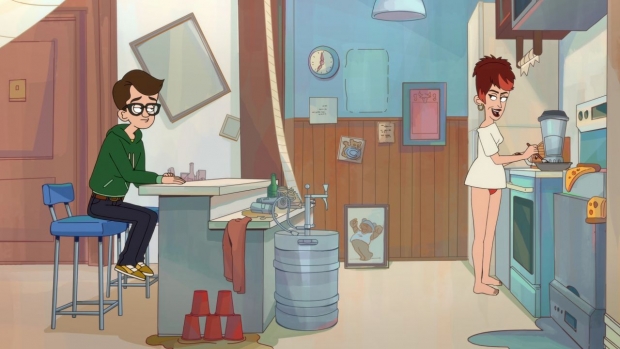 It may be her first animated show, but raunchy comedy is nothing new to Katie Rich, nicknamed “Filthy Rich,” one of the executive producers on Netflix’s latest animated adult comedy, Chicago Party Aunt.

Having written on Saturday Night Live for six years, Rich is well-versed in the world of crass quips. But as the only female EP on a show about a party-hard woman with a “colorful” vocabulary and perspective on life, Rich’s goals were bigger than just punching out laughs.

“There were times where I was like, ‘Hey, gang, we gotta pull it back,’” says Rich, who works alongside fellow EPs Ike Barinholtz, Matt Craig, Will Gluck, Richie Schwartz, and Dave Stassen. “It's not that women aren’t raunchy, but it was very important that there was a richness and complexity there wasn't just a male voice coming out of a female vessel. You don’t want her shepherding a male narrative.”

Created by Rich, Chris Witaske, and Jon Barinholtz - all Chicago natives - the series follows character Diane Dunbrowski (Lauren Ash) as she takes on the unexpected role of a wacky, unpredictable mentor to her nephew Daniel (Rory O'Malley) who decides to escape to Chicago and move in with his aunt in lieu of going to college. The series, produced by 23/34 Productions, Olive Bridge Entertainment, and Titmouse, is based on Witaske’s Twitter account of the same name.

“I knew Chris from Second City and he was bored in L.A. and missed Chicago, so he started this Twitter account,” explains Rich. “Everyone actually assumed it was me. Richie Schwartz at Olive Bridge Entertainment, who is from just outside Chicago, was a fan of the account and he was like, ‘I think this could be something.’ He approached Chris and was like, ‘Is this something you'd want to do?’ And Chris was like, ‘Hell yeah.’” Parties, sports games, and helicopters a-blaze, Chicago Party Aunt is a parade of chaotic and comedic entertainment. According to Rich, Schwartz and Witaske, all three agreed the concept had Rich’s personality woven into the fabric. But what attracted Rich to the project - more than just the chance to bring her home city to life with relatively unfiltered adult humor - was the show’s sincere but also rowdy and blunt female star.

“Especially in adult animation, there's really not a lot of female protagonists,” says Rich. “You see a lot of characters where it’s like this is the mom, this is the wife, this is the daughter, and where these female characters provide a role so that the male characters can get to where they want to go. They progress other people's stories, as opposed to their own.”

She adds, “With Chicago Party Aunt, it was very important that those female characters like Diane weren't just there to facilitate other stories, that they had their own stories that were being explored as well. Especially with Diane’s sister, Daniel’s mother. I didn't want her to come off as the nag bitch wife or the stick in the mud. No one is just one thing. These women had to have their own wants, needs and goals. Otherwise, everything falls flat.”

The female characters also had to be believable and, according to Rich, the jokes that were written into the script played a key role. The bits could be raunchy, but they had to be relevant as well.

“It was interesting to see how certain things just weren't thought about,” says Rich, who also voices Zuzana, Diane’s co-worker. “There were certain pitched where I had to be like, ‘A woman would never do that.’ And it’s not like I’m a prude by any means, but when we were talking about things like aging and insecurities, it was important that Diane and the other female characters not just be male characters on the inside who happen to be female characters on the outside.” For Rich, that awareness and sensitivity to what would make the show great not only came from her being a woman - and a comedian used to being the only woman in a room of men - but also having a personal connection to Diane and the other women in the series.

“There's a bartender in the show named Luann and she is named after, and completely styled after, my sister,” says Rich. “And Diane has a clumsy loyalty to her, and I feel like I have that too. Where we think we're doing the right thing, and then we're like, ‘Oh, no. Maybe I should have stayed out of it.’ But I think we all can be like that. We were so lucky to have such a great group of writers and animators who put so much of themselves into these characters. I hope more people than just me, and that women specifically, can identify with them.”

While comedy entertainment remains primarily male-dominated, Rich hopes Chicago Party Aunt encourages other women comedy writers, or aspiring women writers, to trust their gut and speak up for their visions.

“The good thing about the group of people on this show was that an EP was an EP, regardless of experience or anything else,” notes Rich. “If an EP had a concern, that concern was heard. If I brought something up, it would be listened to and examined. I never felt like it was a situation where I would be outvoted because it was four boys to one girl.”

She continues, “If you’re working on something, and your gut is saying, ‘This doesn't sit right with me,’ speak up,” says Rich. “Sometimes, I worry about being a bother or people looking at me like I’m some kind of histrionic person. But if something doesn’t sit well with you, you owe it to yourself and to other people who might not have the courage to speak up to say something.”