Karni and Saul Create a ‘Perfect World’ for Katie Melua 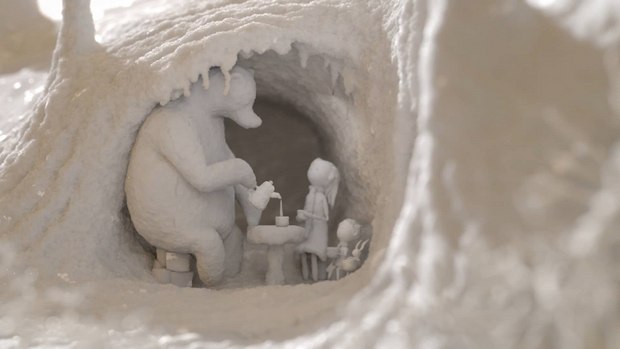 U.K. animators Karni and Saul directed the music video for “Perfect World” from the U.K. chart-topping musical artist Katie Melua. The video is a masterclass in storytelling, employing CG animation in a truly engaging and poignant short film that follows a mother and her young son as they inadvertently delve into a magical wintery forest filled with wonderment and danger:

“Perfect World” is taken from In Winter, Melua’s seventh studio album. Released on October 14th, the album broke into the U.K. Top 10 Album Chart landing Melua her seventh consecutive top 10 studio album. Melua joins Kate Bush as the only two British female artists in history to achieve this accolade. In Winter is co-produced by Melua and Adam “Cecil” Bartlett, and features the 24-strong, all-female Gori Women’s Choir, from the town of Gori, Georgia. “Karni and Saul possess an incredible gift in their ability to create substantial characters who are able to deliver emotional depth within fantastical, meticulously realised environments,” Melua says. “They never veer away from the emotional content and fragility of the song, and that is a very rare and much appreciated quality of theirs. They genuinely care. I am so excited and grateful that they have delivered such a charming and magical movie which brings ‘Perfect World’ to life so magnificently.” Karni and Saul, who have been working together since 2002, were nominated for a BAFTA for their short film Turning, and have won awards (including British Animation Awards) for their previous music videos. “We love producing these kinds of unique projects,” the duo comments. “It doesn’t happen a lot in this industry that you are given the rare gift of trust from your client. The one major development that dominated the script was that the story will be built around this subject: a difficulty/challenge occurs and a perfect world situation is presented as a sort of resolution. Sometimes it's a mother's hug and sometimes it's a magical slide down a frozen waterfall. This ‘tension and relief’ dynamic leads the whole piece. After the initial creative discussions with Katie we were given the opportunity to create something which is close to our heart and that we truly care about.”

Outside of the opening and closing live-action shots, the video is almost entirely CG animation. “Despite the incredibly tight turnaround on this we managed to do a fair amount of look development and testing, followed by very rough pencil animatics, which blocked the storyline,” the duo said of the production process. “CG animatics was produced while we were modelling and texturing the sets, creating the characters, testing and finalising look development. At the end…two weeks of character animation and rendering. Thank you Rebus render-farm for supporting the project!!”