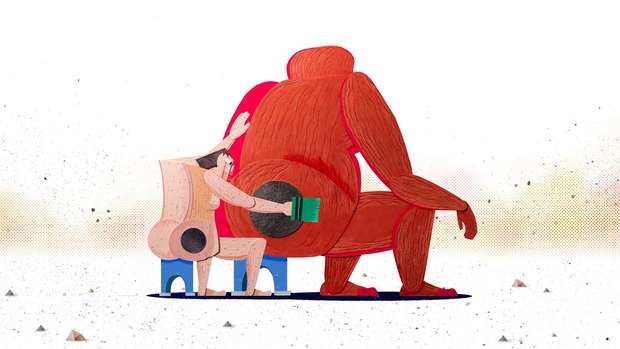 The title, JEOM, roughly translates to “birthmark” or “black dot” in Korean, and provides the film’s storyline. As Kim explains: “Like my father, I was born with a big birthmark on my butt, which I was very self-conscious of. My mother told me that when I got older it would disappear, but it never did.”

The four-minute short film, which premiered earlier this year at Sundance and went on to screen at GLAS Animation and the Ottawa Festival, among many others, recounts the birth of Kim’s first child and centers around the JEOM creating a special link between father and son. The film starts with an oddly humorous reveal of both birthmarks. Believing the two JEOMS are connected, the son furiously attempts to scrub off his father’s blemish, with no success. The son then has a baby of his own, and it’s revealed to the audience if or how the JEOM is passed to the next generation.

JEOM is a sequel to Kim’s previous films 38-39’C (2012) and Deer Flower (2015). It was produced by Los Angeles-based stop-motion specialists Open the Portal and Kim’s production company, studio ZAZAC.