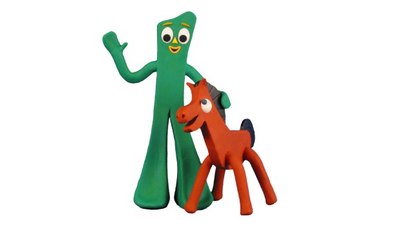 Los Angeles, CA -- Kabillion, the only independently owned company ranked among the U.S. Top 10 Kids Free On Demand TV Networks currently in over 45 million homes and owned by Splash Entertainment, announced that the company has just finalized a deal with Premavision Inc. / Clokey Productions to begin distribution of the beloved pop culture iconic series Gumby on both is VOD platform and its Kabillion YouTube Channel. With 208 episodes, the longtime hit series has aired in over 146 countries and touched many generations, first airing in the early 1950s, and continuing into the 2000s. Gumby will start airing in October.  The announcement was made by Kabillion President & Splash Entertainment co-CEO Nicolas Atlan.

“For well over fifty years, Gumby has inspired people of all ages and nationalities with the shows central concept of lending a helping hand to others. Gumby has truly become a cultural icon,” commented Atlan. “We are excited to bring Gumby to our audience as it is a show that crosses multiple generations and will provide a great co-viewing experience,” added David Di Lorenzo, Vice President of Sales and Marketing for Kabillion.

“My parents created Gumby as a gift of love to children and the child within all of us,” commented Joe Clokey.  “People from all generations have been enthralled with these timeless imaginative adventures.  Families today want to have 24/7 access to content and we are delighted to be partnering with Kabillion who can now make this happen for our Gumby fans everywhere.”

Clokey Productions was founded by Art Clokey and Ruth Parkander Clokey in 1955. The development of Gumby stemmed from the philosophy that Clokey used in his film Gumbasia- the idea that everything in life is based on geometric forms which sparked the idea to form the clay-animated character.

Millions of children all over the world have developed a strong emotional connection to the clay-animated character whose thrilling stories of adventure provide life lessons of what is morally right and wrong. Gumby is loved by many for his good heart and kind nature. Gumby has appeared on television throughout the 1950’s, 1960’s, 80’s, 90’s and 2000’s thanks to syndicated television and recent deals with Nickelodeon, Cartoon Network, Netflix and satellite TV.