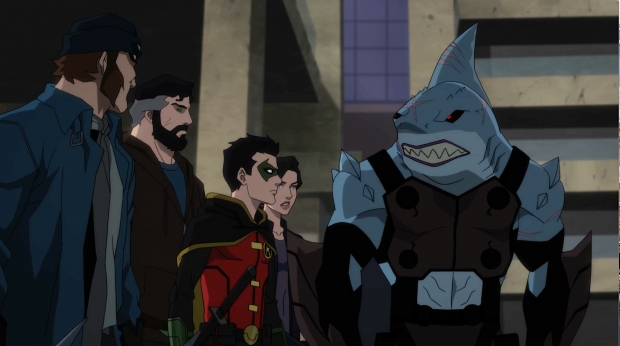 Watch the all-new clip that finds members of the Justice League and Suicide Squad attempting to continue their invasion of Apokolips – only to have a huge obstacle appear in their path.

In another all-new clip, a fairly bored Etrigan (voiced by Ray Chase) taking on an entire brigade of ninjas from the League of Assassins. Also featured are Lady Shiva (voiced by Sachie Alessio), Constantine (Matt Ryan) and Superman (Jerry O’Connell).

Now the remaining bastions of good – the Justice League, Teen Titans, Suicide Squad and assorted others – must regroup, strategize and take the war to Darkseid in order to save the planet and its surviving inhabitants. This is truly the war to end all wars, and only the victor will live to enjoy the spoils.