Learn about the advantages of implementing virtualization technologies at the second annual Virtualize 2015 conference taking place on October 29 at the Hyatt Regency San Francisco Airport. 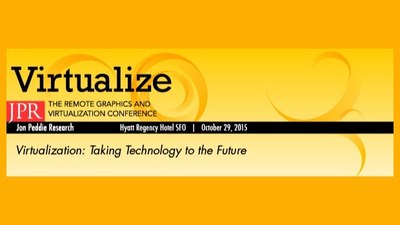 Computer graphics industry analyst Jon Peddie Research has announced the agenda for its second annual Virtualize 2015 conference taking place on October 29, 2015 at the Hyatt Regency San Francisco Airport. The Virtualize 2015 conference will provide attendees an overview of the options available and the ways in which organizations can compete more effectively with the help of virtualization technologies.

The Virtualize 2015 conference evolved from a JPR annual survey, which asked users their plans for using virtualization technology. The technology has advanced with the ability to virtualize GPUs as well as CPUs. It is enabling resource-intensive tasks such as design, visualization, rendering, entertainment content creation, to take place remotely or in the cloud. In addition, virtualization is enabling the extension of services such as education and health care via networked access. Since last year, JPR has seen a significant uptick in user awareness of virtualization and its potential.

"In our recent survey of end users, 23 percent said they expect to see a significant increase in their productivity due to virtualization, and an additional 20 percent expected to see some improvement," said Dr. Jon Peddie, President of Jon Peddie Research. "We were surprised by how many people were aware of virtualization, 51 percent, that's significant."

This year, the conference is focused upon new applications emerging from virtualization technology. In general, virtualization is available to users in three, non-exclusive modalities: pixel pushing, browser based apps, and cloud paging. They're enabled by standards and technologies including VDI, Virtual Machines, HTML 5, OpenGL, WebGL, DirectX, and more. Applications can be accessed as needed or through remote workstations, which provide the same capabilities as traditional PCs, both deskbound and laptop.

The conference agenda includes industry leaders who will describe the systems they have developed to take advantage of virtualization. They represent the entertainment industry, design, GIS, gaming, and advanced technologies including virtual reality.

The best practices panel will feature experts who will provide greater detail on the available virtualization options and the best applications for those technologies.

To explore the full agenda or register for the event click here.